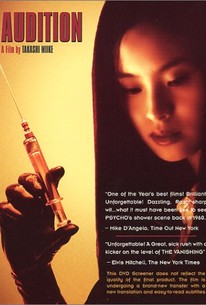 Critics Consensus: An audacious, unsettling Japanese horror film from director Takashi Miike, Audition entertains as both a grisly shocker and a psychological drama.

Critics Consensus: An audacious, unsettling Japanese horror film from director Takashi Miike, Audition entertains as both a grisly shocker and a psychological drama.

Critic Consensus: An audacious, unsettling Japanese horror film from director Takashi Miike, Audition entertains as both a grisly shocker and a psychological drama.

Controversial Japanese director Takashi Miike creates this unnerving horror film about a widowed TV producer auditioning prospective wives. In his search, one candidate particularly stands out, a lovely ex-ballerina dressed in white. The widower cannot believe his good fortune, until he starts looking more closely at his potential bride-to-be: her autobiographical details don't quite check out, she has a number of ugly scars on her legs, and he learns that people in her life have a habit of disappearing. When he discovers a man trussed up in her living room with his tongue and feet lopped off, he concludes that she is perhaps not the woman of his dreams. Audition was screened at the 1999 Vancouver Film Festival. ~ Jonathan Crow, Rovi

This movie, at just under two hours, is a long crawl from inception to climax.

Miike is brilliant at transforming the mundane and familiar ... into something sinister and eerie.

A diabolically adroit piece of filmmaking that goes even further than the films of Italy's excruciatingly macabre Dario Argento.

This brazen shocker is never less than compelling -- even when you feel compelled to shut your eyes.

There will be many people who consider Audition an atrocity, and a few who find it a stimulating cinema experience.

A horrific tale about the mysteries of unseen boundaries. Whatever you do, don't watch it with the person you love. It gets rather awkward. [Full review in Spanish].

The film is a brutal examination of social isolation and malaise, and the gulf that often exists between men and women.

Takashi Miike's startling blend of gentle family melodrama and graphic horror is easy to either admire or hate, but impossible to ignore.

But it's one man's pursuit of one woman who turns out to be so much more of his crazed counterpart than he could have ever feared, which makes Audition so petrifying.

With escalating unease and a switch and bait that Hitchcock would be proud of, Audition culminates in its infamously disturbing dénouement.

The shifts in tone along the film are completely baffling, as it begins as an unsettling drama, then becomes a romance, and then finally makes it clear that all that was just a weird prelude to a shocking, outrageous and confusing third act that doesn't make much sense.

From the very beginning, before things slide greasily into OMG, there's a creepy ominous feeling. I thought it was cultural differences. "That guy takes a drink in every scene he's in, and none of them look like a drink because he's thirsty..." It's a creepy ominous work.

Audition is an impressive Japanese horror tale that is brilliantly acted and directed. The film is a raw, gritty and tense film that has secured a place for Japanese horror in the horror genre. The story is simple, yet effective. The film has enough good gory moments to please fans of the genre, and it is a film that should be seen if you love these types of films. Japan has made quite an impression in the genre, and films like Audition will definitely make you take notice. This is not a film that is easily forgettable. The gore is great, the violence is in your face, and it is a riveting picture that is a modern classic of foreign horror. If you love horror films that push limits, then this is a must see film. Japan are wonderful filmmakers that tend to deliver some truly original horror films and the fact that they use the basics in order to create something truly intense, makes these films much better than most American mainstream horror films. The film is not for everyone, but if you love foreign horror, then give this one a shot, you're sure to enjoy it, and it definitely delivers effective gore content with scenes that are truly unnerving and horrifying. Audition is an accomplished picture, and one of the better Japanese horror films. The film boasts a strong lead character that is truly demented and unforgettable, and that's what makes this a superbly crafted horror picture. There are some flaws, and the plot at times could have been better, but for the most part, the gore and good direction overcomes its weaknesses to create a unique and terrifying horror tale that will stick with you long after you've seen it. I have a fondness for Japanese horror, and Audition is one of the finest examples of a must-see genre of horror films.