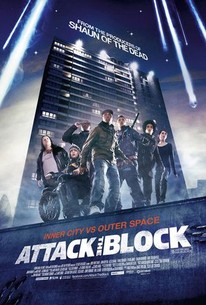 From the producers of Shaun of the Dead and Hot Fuzz, Attack the Block follows a gang of tough inner-city kids who try to defend their turf against an invasion of savage alien creatures, turning a South London apartment complex into an extraterrestrial warzone. -- (C) Sony Pictures

News & Interviews for Attack the Block

View All Attack the Block News

Critic Reviews for Attack the Block

Attack the Block is essentially an action thriller and as such is effective.

Here is a shaggy monster movie that pulls double-duty as a satire of class and ethnic barriers, and how those barriers quickly disappear when we are forced to fight for our simple survival.

Attack the Block attacks the alien invasion genre with wit, energy and a cheeky insolence that makes it out of this world.

An energetic genre ride with social ambitions about race and class.

"Attack the Block" demands to be seen simply because it is a thrill - a pulse-raiser whose perfect construction and pointed wit make it one of the year's most exciting films.

The movie's amateurishly made. But the script is full of little surprises.

Attack The Block is my favorite film of 2011.

I'm glad that science-fiction continues to nip at our sense of social consciousness with remarkable storytelling.

Part of what separates Attack the Block from its Spielbergian inspirations... is the sort of reflection on social and racial issues typically left out of popcorn fare.

Stands on its own two feet amongst the usual Brit comedy suspects, which is largely due to its cast of unknowns.

Attack the Block is one of the funniest films of the year, an even bigger achievement when you realize that almost all the young actors in it are making their feature debuts.

Look, this is a nicely performed film which is kept quick and tight, but for a comic horror it's just not funny or horrifying enough.

Audience Reviews for Attack the Block

This deserves a place in the pantheon of outstanding directorial debuts.

A Goonies, Gremilins and Kill Bill Mix that is just great.

Well I watched it. All of it. It definitely was interesting. Within the first minute I had to put on the subtitles, because I had NO idea what language they were speaking. Apparently, South London has their own style of English...gibberish. The movie itself was kind of fun, in a way. I guess. It definitely was different. Made me laugh a few times..that's always good.

My first impressions for this British made sci-fi were not good, not good at all. We are introduced to a small gang of South London youths in your typical modern day gang get up...hoodies, baseball caps, tracksuits, gold chains around their necks, riding bikes and the obligatory Staffy pet dog. This foul mouthed bunch of yobs go about robbing a female passer by at knife point clearly relishing every moment of it. Its at this point I immediately hated what I saw. Maybe its because I live in South London, I know London very well and have experienced gangs like this in reality. Maybe its the fact that South London is exactly like this with massive problems of gang culture, knife attacks, muggings and (some) youths generally acting as portrayed in this film. The gang consists of teens, mainly black with one white boy (who typically thinks/pretends he's black). Unless you know South London you will probably need a translator to understand what they are saying in this dreadful gangland/street culture way of speech that has evolved in London. The dialog is chock full of 'bruv' 'cous' 'blood' 'innit' 'for real' 'ghosting' 'ducking' 'breezing' 'fam' etc...they sound like morons and I hear it often in everyday life. Yeah I know I sound like an old fart but this is what we have to put up with in South London, this film is very accurate, so much so its annoying. So basically I found myself hating the main characters in this film right from the word go, this gang are the 'heroes' as it were and we're suppose to root for them? yeah right. Twas only when the invaders popped up I got into this, well once this gang started to get some extraterrestrial 'retribution'. The actual sci-fi element of the film is pretty good I must admit. The whole thing runs along the same kind of lines as 'Aliens' (and tonnes of others) with the standard escape plot and the standard 'characters getting killed off one by one' idea. Nothing original but it is very effective setting it within the confines of a tower block. It doesn't seem totally thought out though as why would these aliens only stick to this one block? there is a reason of course but surely they would spread out and explore. Also you'd think with all the noise, violence, bodies and general racket going off people might notice and call the police, surely there would be 999 calls going off every minute. Also no one ever thinks that maybe the discovery of alien life might be kinda important, if you wanna make money then maybe tell someone instead of smoking weed. I must also give huge kudos to the design for the aliens as they look truly terrific. At first you're thinking they are gonna look rubbery and cheap (especially after the first encounter), but with a combination of CGI and men in suits the look is really quite eerie and original at the same time, amazingly!. Think big pitch black coloured gorillas with a set of bioluminescent jaws (teeth) that glow blue, sounds odd I know but they are highly effective and really lift the film. You wouldn't think this was a cheapish simple Brit flick horror, if it wasn't for the aliens this wouldn't be half as good. So yes I enjoyed the alien aspect of the film and it doesn't hold back on blood n gore which is good. The main problem for me was the gang of scrotes that are fighting the aliens and meant to be bad guys turned good in a coming of age kind of way. This is in no way a feel good 'Goonies/Stand By Me' type group, far from it. Bottom line is they are all thoroughly unlikeable and I REALLY wanted all of them to get eaten by the creatures so badly. To be honest I'm sure there would be many South Londoners that would agree, if only there were some real monsters cleaning up the streets by eating all the hooligans.