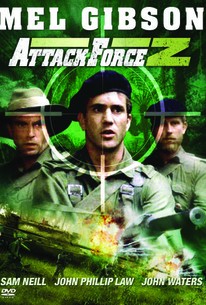 Force Z is a crack Australian military corps during World War II. When a plane carrying a high-profile Japanese defector crash-lands somewhere in the South Pacific, it's up to Force Z to find it. Complicating matters is a traitor in the good guys' midst. John Philip Law heads the cast of Attack Force Z, but some video companies have bestowed top billing upon Mel Gibson, originally listed 3rd in the cast. The film also features an early leading peformance by Sam Neill.

There are no critic reviews yet for Attack Force Z. Keep checking Rotten Tomatoes for updates!

There are no featured reviews for Attack Force Z at this time.