Atlas Shrugged: Who Is John Galt?2014 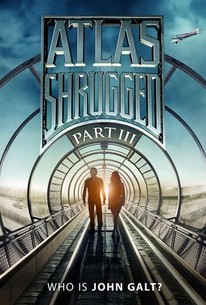 Approaching collapse, the nation's economy is quickly eroding. As crime and fear take over the countryside, the government continues to exert its brutal force against the nation's most productive who are mysteriously vanishing - leaving behind a wake of despair. One man has the answer. One woman stands in his way. Some will stop at nothing to control him. Others will stop at nothing to save him. He swore by his life. They swore to find him. Who is John Galt? (c) Atlas Shrugged LLC

Critic Reviews for Atlas Shrugged: Who Is John Galt?

The prior installments weren't very good movies, and it should surprise few that this last one is the worst of the lot.

Rand's parable is meant to showcase just how much our world needs the best of us, but this adaptation only does so accidentally -- by revealing what movies would be like if none of the best of us worked on them.

A missed opportunity to speak to anyone other than the converted, but at least as the culmination of its makers' will.

To find fault with the Atlas Shrugged franchise because of its politics is like complaining about Birdemic because it gets the ornithology wrong. Why dwell on the details when there are giant, embarrassing flaws staring you in the face?

We get it, we get it: Capitalism is good, government is bad. But "Atlas Shrugged: Who Is John Galt?" is worse.

In 1949, when Warner Bros. filmed The Fountainhead, Rand threatened to burn down the studio if they compromised her novel. I'd like to think that if she were alive she'd be looking for lighter fluid for this one.

With virtually nothing that happens onscreen resembling human behavior or emotion to any real extend, the film can't even function as propaganda.

The favorite book of many young sociopaths you meet in business schools, it's all about a bunch of rich crybabies who don't want to share their toys so they break them and go home.

Both the cheapest-looking and most narratively deficient film in the series, a rather pathetic end to a project undertaken with more ambition than talent.

Audience Reviews for Atlas Shrugged: Who Is John Galt?

Thank goodness there won't be any more of these turgid, laborious, and insufferably awful movies that stretch the loose definitions of cinema. Atlas Shrugged Part III concludes a storyline that did not need the bloated, Peter Jackson-style treatment. Mostly because after four hours, the series still fails to justify its film existence. The production values are pretty low, the storyline consists of robotic characters spitting out ideologies rather than dialogue, and the romance between Dagny (our third actress playing the part) and Henry Reardon, which was a focal point for two movies, is casually brushed aside so Dagny can swoon with the mysterious John Gault. The needless subtitle for the film is "Who is John Gault?" and the answer is an innovator who invited the world's richest CEOs to escape to a magic kingdom of their own. Analyze that hilarious reality. It's an island of the 1%, but what does being experts on derivatives do when it comes to individual survival in the wilderness? Do these people plant their own vegetables, build their own homes, or do the menial labor they are not accustomed to? Where did they get the materials for all the goods for this libertarian paradise? Nothing about how this world operates makes sense. If the government, set up to be nefarious and inept, was concerned about Gault why can't they find them with their wealth of spy resources? The entire Atlas world, transported to a near future that still relies heavily on logistics of the past, strains credulity, from the rise of rail to the idea that a copper shortage is crippling the country's power supply. This is the kind of film where the good guys (business elites) dress in plaid and drive pickups, whereas the bad guys (government) wear suits and smoke and drink in darkly lit restaurants. This is the kind of movie where "Project F," a nefarious torture device created by the government, is literally nothing more than a glorified car battery. Then there's the climactic moment when Gault becomes a full-fledged messianic figure, something in sharp contrast with author Ayn Rand's views on religion. In fact, Jesus is a prime example of self-sacrifice for the benefit of others, which conflicts greatly with the Randian viewpoint that selfishness is all humans should seek. The entire film is about cognitive dissonance, from the characters, the filmmakers, and Rand herself. Nate's Grade: D-

The progressive liberal critics are afraid, afraid to show any signs of defeat of their fallacy by Objectivism. Atlas Shrugged: Who Is John Galt? is the conclusion to the epic saga of the producers going on a strike against the moochers and looters in the last free country where freedom is at the brink of disappearance. Sure, the acting was terrible and the dialogues seemed forced but with such a low budget and such a grandiose production, you have to give and take for the sake of producing the best result possible. Which is similar to the character Dagny Taggart who, despite all the regulations and restrictions, she made her transportational company prevail. The thing is, they had to fit about 400 pages into a 90 minute film, they had to make a lot of cuts and changes (which even Rand herself would find difficult to do). The casting for Francisco D'Anconia was my biggest concern I believe, he was the childhood friend of Dagny yet he looked about 30 years older. The set design was so detailed, every single prop was specially made to meet the standard of fictional brands. Mulligan's Valley/Galt's Gulch/Atlantis was very close to what I expected in terms of the design and structure. The amount of effort reflected its theme perfectly. The editing and narration were dreadful, clearly the story telling portion of the film wasn't the forte of the directors. Personally, I think it would have been so much better to just do the section of Dagny's arrival in one go without keep jumping back to New York. And it didn't have the scene where John Galt was forced to go on television but outsmarted the Autocrats, neither was the Hank Rearden subplot, I was disappointed. However, I enjoyed the film and understand its limitations. "Do not let your fire go out, spark by irreplaceable spark in the hopeless swamps of the not-quite, the not-yet, and the not-at-all. Do not let the hero in your soul perish in lonely frustration for the life you deserved and have never been able to reach. The world you desire can be won. It exists.. it is real.. it is possible.. it's yours."- Ayn Rand.

So bad it's good...well not good exactly...but fun in that bad movie kind of way, Atlas Shrugged III: Who Is John Galt? is an embarrassingly inept conclusion to Ayn Rand's literary classic. In this climatic chapter Dagny Taggart discovers a hidden community where the world's leading industrialist and thinkers have withdrawn to and the man behind it all, John Galt; meanwhile Dagny's brother James collaborates with a secret cabal to nationalize the country's remaining industries. Once again all the roles have been recast ('cause it worked so well for the last film), which leads to two major problems: the characters don't feel consistent and the actors playing Dagny and Galt have no chemistry together. Also, the film employs the use of voice over narration, which makes it feel like a cheap television documentary. While it's entertaining to watch a film like Atlas Shrugged III: Who Is John Galt? go horribly wrong and self-destruct on screen, that's not much of a recommendation.