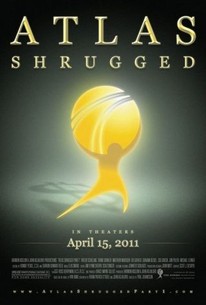 Critics Consensus: Passionate ideologues may find it compelling, but most filmgoers will find this low-budget adaptation of the Ayn Rand bestseller decidedly lacking.

Critics Consensus: Passionate ideologues may find it compelling, but most filmgoers will find this low-budget adaptation of the Ayn Rand bestseller decidedly lacking.

Critic Consensus: Passionate ideologues may find it compelling, but most filmgoers will find this low-budget adaptation of the Ayn Rand bestseller decidedly lacking.

Dagny Taggart (Taylor Schilling) runs Taggart Transcontinental, the largest remaining railroad company in America, with intelligence, courage and integrity, despite the systematic disappearance of her best and most competent workers. She is drawn to industrialist Henry Rearden (Grant Bowler), one of the few men whose genius and commitment to his own ideas match her own. Rearden's super-strength metal alloy, Rearden Metal, holds the promise that innovation can overcome the slide into anarchy. Using the untested Rearden Metal, they rebuild the critical Taggart rail line in Colorado and pave the way for oil titan Ellis Wyatt (Graham Beckel) to feed the flame of a new American Renaissance. Hope rises again, when Dagny and Rearden discover the design of a revolutionary motor based on static electricity - in an abandoned engine factory - more proof to the sinister theory that the "men of the mind" (thinkers, industrialists, scientists, artists, and other innovators) are "on strike" and vanishing from society. -- (C) Official Site

Made on the cheap with no-name stars, this is no better than a stilted anachronistic curiosity, a low-rent version of the eighties' prime-time soap Dallas, with the industrial concerns and sexual mores of 1950s, all, somehow, set in 2016.

A talky bore that spends too much time in wood-panelled offices and at chatter-heavy parties that were clearly shot on the cheap.

Atlas Shrugged: Part I is in many ways charmingly oblivious to its inherent contradictions and the fact that its capitalist titans appear to be squatting in old, abandoned Dynasty sets, eating food-court baked potatoes.

The film is curiously sterile and lifeless, hardly the stuff of revolution. It feels more like an ideologically reversed Tucker: The Man And His Dream, written and performed by robots.

[A] DIY megaproduction... whose ambition vastly exceeds its technical command.

While they've produced a competently made film, they haven't pulled off a miracle. Atlas Shrugged is much as you'd expect.

The very nature of Atlas Shrugged -- turning on its head all the typical clichés of who's a hero and who's a villain and its refreshing honesty about the way Washington works-gives it a certain liberating energy.

Every cult needs its own wacky trainwreck of a movie... and now the cult of Ayn Rand gets Atlas Shrugged, Part 1.

The awfulness of Atlas Shrugged continues a trend, since the cinema has never treated Rand very well.

Although it's not as bad as its trailer might suggest, this first part of a projected three-part series will probably please the already converted but bore and annoy just about everyone else.

While staying true to Rand's vision, Atlas Shrugged: Part 1 suffers from poor directing and it lacks the sleekness it needs to connect with audiences.

Amy Curtis
We Got This Covered
View All Critic Reviews (51)

The origin of how I learned of this film really had to deal with me learning that, for reasons I have yet to completely learn all about, the late vocalist Ronnie James Dio ended up having something of an involvement with this film. Once I learned that, I ended up doing research on this film until I learned that it was to be based on the first third of a brick of a book written by Ayn Rand. Reading the original novel, I was taken aback by how modern the tale reads in this day and age. Even more so, how prophetic the story is. With the film, it honestly tries to do a good job. Keyword being tries. The main fault with this film is how cheap it looks and feels, which is a disappointment. This film was made on less than a shoe string budget and, unlike films that make it hard to tell that it was made for dirt, this film shows it. Yes, the film looks beautiful, but aside from that, this film really offers nothing at all other than showing something of a mafia film, but replace organized crime with Train companies. Back to the part about this film feeling like a mobster film, to me it was quite clear how much of an influence Francis Ford Coppola and Martin Scorsese had on Paul Johansson's direction. To me, it seemed like he watched their films, saw how they were great, and tried to take their talent without really adding any of his own. This aspect was a disappointment. The main good thing he does is make some of the talking scenes (and there is a lot) fast paced and pleasant to look at. Other then that, he does not really do anything that works good at all. Except for directing Taylor Schilling as the main protagonist Dagny Taggart. Taylor Schilling is the best thing in this film, bar none. I will say that she does give a good performance, but that is not really saying anything at all. The other actors do a decent to okay jobs, but nothing really that stands out to me. The reason why I feel like having to say Schilling's name is due to her giving Dagny the most human of feels plus making her a strong, powerful female character. Her only fault with this film is the lack of emotions she has. For most of the film, she has this poker face like look and, while the character is established at the start of the film that she has no feelings, we all know that she is human and all humans have feelings. So, I would of liked to see more a human side to her. But for what she did, she did good, but not Oscar worthy. With adapting the script, I am going to play Devil's Advocate and give this film the benefit of the doubt due to how difficult it is to adapted a 1200 page novel into three films, then take the four hundred pages that make up this film and break it into a one and a half hour film. Personally, I wish that there could have been a way to expand the script and the film by about thirty to forty five minutes and have more material put in. The novel, when read, is like reading beautiful poetry. When transitioned into film, it looses it's beauty. But, then again, I understand due to the difficulty of adapting a novel of this scope into a film. Looking at other critical reviews of this film, I will say that this film is the most misunderstood and unfairly treated films of 2011. Yes, this film is not great nor is it even good entertainment. But, I will admit that there is something of a charm with this film that I like. But, I doubt I will set and watch this film again in the recent future nor watch this film over and over again. However, this is a film that I do ask people to give a try if they don't have the patience to read the original novel.