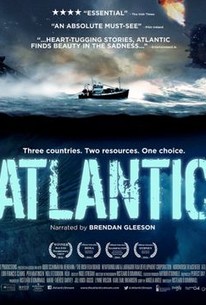 Once upon a time the Atlantic Ocean was seen as Ireland's most valuable resource, but following industrialization we turned our back on the sea, coming to see it merely as a route over which to send our goods and our young, work-seeking people. Other countries, notably Canada and Norway, continued to place great value on their territorial waters and basins. As politicians in Norway and Newfoundland have moved to protect their ocean resources over the past 50 years--especially oil, gas and fish--Ireland has allowed these resources to fall into the hands of foreign private interests, often ceding control long into the future. The contrast between Ireland and her coastal neighbors could not be more striking. Our documentary 'Atlantic' explores the manner in which Norway and Newfoundland have managed their own ocean resources for the benefit of their populations, as Ireland steers a contrasting path. Will the lessons learned in Norway and Newfoundland be heeded on Irish shores, before it's too late?

The humanist doc is one-sided, with no voice given to the politicians who balance big and small interests, but the overall message of short-term economic gain versus long-term sustainability is well delivered (if obvious).

If you have any sort of an interest in Ireland and our great natural resources, Atlantic is an absolute must see, which will have your blood boil, and make you feel impassioned by an often over-looked issue.

Atlantic succeeds as a lament about fisherman forced to pay witness to what seems unimaginable: a corporate takeover of the Atlantic Ocean.

Never one to shy away from those culpable, O Domhnaill shines a strong light on those in power, both past and present.

There are serious lessons in Ó Domhnaill's film for Irish government policy, if it is not too late to reverse the sins of the past.

Well researched and put together, this is important stuff.

It's a fine, if rather depressing documentary.

There are no featured reviews for Atlantic at this time.