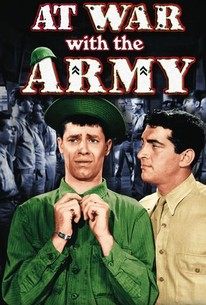 At War With the Army Photos

Though At War With the Army was the third film appearance of Dean Martin and Jerry Lewis, it was the team's first starring vehicle. A pattern is set herein for all the Martin-Lewis flicks to follow: Martin plays a self-assured romeo, forever bursting into song, while Lewis is a hopeless screw-up unable to perform the simplest task without wreaking havoc (in this one, he can't even operate a Coke machine properly). Mike Kellin repeats his Broadway role as M&L's tough topkick while Polly Bergen makes a very brief appearance. Because it has lapsed into public domain, At War with the Army is one of the most available of the Martin and Lewis films.

Dewey Robinson
as Bartender
View All

Critic Reviews for At War With the Army

Sets the low standard for all the team's future comedies by Lewis doing the physical comedy and Martin operating as the aloof straight man.

Audience Reviews for At War With the Army

Filmed in their heyday, while they were still a true team and not battling egos, this is less a film than a Broadway play adapted for film and the then very popular Martin and Lewis team. Despite the wrinkles on some of the comedy (mugging stolen from Harpo Marx!) there are moments when the magic happens ... and usually when they are together onscreen. Film fans will enjoy the "Bells of St.Mary" sketch.

At War With the Army Quotes