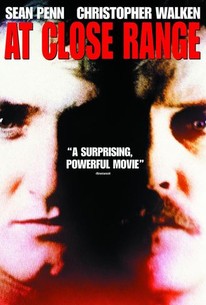 True story of an aimless Pennsylvania teen who is drawn in to his father's life of crime. Powerful performances by all!

Bob McDivitt
as Farmer with Shotgun

News & Interviews for At Close Range

View All At Close Range News

Critic Reviews for At Close Range

General audiences will respond to the very strong performances of the two leads, especially Walken in one of his best roles.

There's something bold about the film's wealth of imagery, but it also so overstates the material of the screenplay that it eventually annihilates both it and the story.

Penn and Walken [are] at the top of their forms in roles that give them a lot to work with.

Director James Foley and screenwriter Nicholas Kazan expertly recreate that part of America that feels like it should exist under a rock with the clammy mud and scurrying insects, and their efforts are supported by an intense performance from Walken.

A grim true story thriller that never relents in its violence.

...the film's finish is far more grim and bleak than one could possibly have anticipated.

Relentlessly grim, At Close Range offers a frightening glimpse at the dark side of American life and poses disturbing questions about family ties.

Engaging performances by Penn and Walken can't quite turn this brutal curio into something more substantial.

Brittle and rough; full of excellent performances, too.

Though beginning as a tale about alienated youth, the film quickly devolves into a melodrama of a son (Sean Penn) corrupted by his own father (Christopher Walken) in a valueless world.

A riveting film about murder, the father-son relationship gone bad and the high cost of rejecting the view that might makes right.

Audience Reviews for At Close Range

Fact is stranger than fiction. And it was so in this case. I found the real events on which the movie was based to be creepier than the movie itself. I was startled to learn that some of the sequences weren't artistic creations, but it happened for real. For example: I found the scene where Brad Jr. gets shot with Terry, but survives it, to be unbelievable, but was surprised I was furious over that clickhe when Sean Penn came out of the car after being hit badly. Thoughj it may not have happened per se as in the movie, but it did happen seems surprising. The screenplay could have been better than what it is with the given storyline.

Yes, this movie is based on a true story, but true stories aren't always that good as movies. I liked some of this movie, it's got some good actors, too, but most of it was boring and I didn't care for the end.

Christopher Walken and Sean Penn star in this much overlooked film from 1986 regarding a family of small-time criminals. Walken plays Brad Whitewood Sr., the malevolent, soft spoken father who really cares about his family of criminals, yet his own flesh and blood's importance to him is quite dubious. Sean Penn and his brother Chris portray the Whitewood sons Brad Jr. and Tommy, and a slew of other known actors such as the brilliant Crispin Glover play friends and partners in crime. If you've missed this one and are a fan of any of the aforementioned actors, I highly recommend this.

Excellent movie! Relentlessly intense and depressing. Powerhouse performances by Sean Penn and Christopher Walken. At Close Range is based on the true story of one of the most notorious gangs in the history of Pennsylvania that was led by Bruce Johnston. The True Story - The gang and its wide network stole primarily in Chester County, according to a 1980 Pennsylvania Crime Commission report, but they made their way into Lancaster County on several occasions. They also crossed the state lines to Maryland and Delaware. They stole items ranging from antiques to drugs. In each break-in or theft, gang members used their skill in picking locks, cracking safes and disarming or averting security systems. They used walkie-talkies and police scanners. While planning a job in one part of the county, they would divert the state police by phoning a false report elsewhere. The Crimes - 1971 August 1971: Dutch Wonderland's castle on Lincoln Highway East. One of the men pried open the door to the park's shop, a small building hidden from the road. The burglars gathered a hammer, crowbar, rope and torch. They brought their own walkie-talkies. The men prepared for descent into the park office, in what would later become the worst-ever burglary of the popular tourist attraction. The police believe the culprits were David, Norman and Bruce Johnston Sr and their associates - all members of the "Johnston Gang". The burglars got $33,000 worth of loot. 1975 The gang broke into the Meadie Heights Country Club's pro shop. They made off with $15,000 in money and golf equipment later that year. They drilled holes in the side of the Meadia Heights pro shop and disarmed the alarm system. They dynamited the safe. None of the merchandise was recovered. 1976 Janet Gazzerro and her husband Frank were convicted of bribing a juror who was on the Chester County Common Pleas Court where among others Bruce Johnston Sr was accused of the theft of a tractor. Janet and Frank received $83,000 in stolen Oriental rugs, jewelry and furs. Janet said that Bruce Sr gave her two or three garden tractors, she kept one or two and the third one went to the juror. Bruce Sr, David and Norman Johnston and Roy Myers were acquitted of the theft charges. 1978 April: The brothers transported $21,900 in stolen cigarettes across state lines. They all pleaded guilty to this crime in 1981. May: The three brothers stole $28,000 from Longwood Gardens in Chester County. In 1981 they were serving two-to-four year sentences for convictions on state charges of this crime. The Kiddy Gang - In 1977 Bruce Johnston Jr. started the Kiddy gang under supervision of his dad Bruce Sr. With the Kiddy gang, they stole small garden tractors, dealt in cigarettes and a lot more. They also stole car parts for Bruce Sr. to resell. In the summer of 1977, while Bruce Jr. was in prison for petty crimes, his girlfriend Robin Miller claimed she had been raped. Bruce Jr., then 20, agreed to testify against the family, according to newspaper accounts of the gang. As investigators began questioning other members of the gang, including Bruce Sr.'s stepson Jimmy Johnston, the three senior Johnstons plotted to kill the informants. In August 1977, Jimmy Johnston and three other members of the Kiddy gang were shot in the head and dumped in a hole. Kiddy gang member James Sampson - whose younger brother was killed earlier - demanded to know where his brother was and was killed in the same way. Norman and David tried to carry out a $15,000 contract placed by Bruce Sr. on his son. On August 30, 1977, Bruce Jr. was shot nine times during an attack outside his then-fiancée Robin Miller's area home. He survived and later testified against his father and uncles. Miller died in the attack. Bruce Jr was placed in the federal witness protection program . He has since left the program and goes by his real name. Although the movie doesn't cover all of this it does show a great deal of what really happened. Very intense movie and very sad too. This is definitely a must see. Powerful, powerful film...and scary as well(in the real life sense). Highly Recommended!