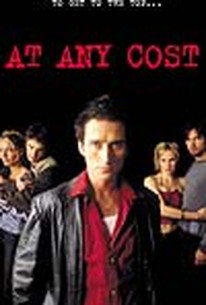 At Any Cost is the story of the rise and fall of a "one hit wonder" singing group. Lance and Mike, a pair of brothers living in Austin, TX, make a bid for the big time by forming a rock band called Beyond Gravity. Lance's wife Chelsea is recruited as the band's bass player, while the brothers' best friend Ben is appointed manager. The group's optimism and idealism is quickly ground down by failed performances, the foot-dragging of the label that signed them, Ben's ruthless and obstreperous business practices, and above all, by Mike's substance abuse. Just when it appears as if the group's fortunes will change, tragedy strikes. At Any Cost was produced for VH1 as part of that cable channel's "Movies That Rock" series. In an unusual move, the producers created the group Beyond Gravity before the film was made, the better to fit the plot line progression to the group's songs, rather than the other way around. The film's soundtrack (and its subsequent CD) also features the talents of Andreas Johnson, Barenaked Ladies, and Eagle-Eye Cherry. At Any Cost was first broadcast on August 16, 2000.

Critic Reviews for At Any Cost

There are no critic reviews yet for At Any Cost. Keep checking Rotten Tomatoes for updates!

There are no featured reviews for At Any Cost at this time.

At Any Cost Quotes