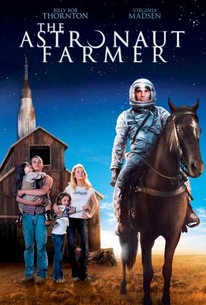 Critics Consensus: The Astronaut Farmer is a charming, inspirational drama that successfully avoids modern cinematic cliches while appealing to the optimistic dreamer in all of us.

Critics Consensus: The Astronaut Farmer is a charming, inspirational drama that successfully avoids modern cinematic cliches while appealing to the optimistic dreamer in all of us.

Critic Consensus: The Astronaut Farmer is a charming, inspirational drama that successfully avoids modern cinematic cliches while appealing to the optimistic dreamer in all of us.

Dismissed from NASA's space program, former astronaut-in-training Charles Farmer pursues his lifelong dream by building his own rocket. On the eve of his launch, he must battle foreclosure on his ranch, a small-town community of disbelievers, the FAA and FBI agents who want to shut him down in the name of Homeland Security--but he remains determined to reach his goal and instill in his children the courage to pursue their own dreams, no matter the odds.

Dianne Anderson Mathis
as Reporter No. 1

William Lawrence Allen
as Reporter No. 2

Robert E. Fleischer
as Will Beacon

News & Interviews for The Astronaut Farmer

View All The Astronaut Farmer News

Critic Reviews for The Astronaut Farmer

Fueled by a decidedly American formula of can-do crazy, The Astronaut Farmer feels, for all its libertarianism, a little lost in space.

Too odd for a studio movie, too cornpone for the independent scene, The Astronaut Farmer

You either roll with the hokum or you don't. If you do, the essential message of realizing your dreams flies as well as Jimmy Stewart's angel wings. If you don't, reality is as close as the nearest window.

A mysterious little movie about a man following his dream, The Astronaut Farmer seems to be a visitor from some alternative universe, a place where logic and reason and recognizable human behavior have little reign.

The Astronaut Farmer's goofy quality makes it totally endearing. It's also super entertaining. Critics are fond of referring to movies as a 'great ride.' With this one, the words couldn't be more apt.

Filled with lovely images (the opening credit sequence, of Charlie in his spacesuit, riding the range on horseback, is a beaut) and nice character turns, The Astronaut Farmer nonetheless veers too close to cliche.

It is a charming, endearingly old-fashioned piece of feel-good fluff that wears its heart on its plaid flannel sleeve, but it is as warm and familiar as grandma's old quilt on a cold winter night.

While The Astronaut Farmer may occasionally get its priorities mixed up, it is refreshing to spend some time with a movie that acknowledges the unique role that men play in families-a role that cannot be filled by any of today's trendy substitutes.

The Astronaut Farmer is one of those movies that you don't believe for a moment while you're watching it, but you leave with a warm glow. But by the time you've driven home, you realize you've been conned.

We should be routing for Farmer and delighted that his dreams are finally becoming a reality, but, instead, the implausibility of the whole thing, the sheer Disneyification of its premise, the Capra-corn nature of its "follow your dreams and never, ever q

It's hard not to like this goofy little film...engaging and uplifting for young and old.

Audience Reviews for The Astronaut Farmer

The first ten minutes were the most tedious I've spend in ages. Is Billy Bob Thornton betting on his appeal to carry a movie, because I think that currency has been devalued. Anyway, the story is bogus: who even OWNS a family farm anymore? They're just feeders into Big Food. And why now? He's been at this rocket building task for ten years. Too unbelievable to be real and not charming enough to be good fantasy.

A Texas rancher (and former Air Force pilot) decides to build a rocket in his backyard. Everyone's against the very idea ... except his family, and that's the meat and potatoes of this work about a family sharing a dream. So what if its unbelievable after that? A warm and fuzzy visit to the dreamtime. Look for an uncredited big time celeb cameo appearance.

The Astronaut Farmer is the fictional story of a former NASA astronaut who builds his own rocket to travel in space. The film follows the same feel good formula that many other films have taken, and the results are somewhat mixed. The film is average and can almost be seen as recycled ideas from previous films dealing with achieving the impossible. Obviously the character building his rocket will have obstacles to overcome and there'll be a period where he'll just want to give up, but he's encouraged to continue. The feds get involved because they believe that Charles Farmer is building a WMD in his barn. He faces the feds, skeptical neighbors, but he'll prove them wrong. Astronaut Farmer is typical of the feel good film. The film is good to watch, but it doesn't do anything new or original with the script. The Astronaut Farmer is a good film to watch with your family. Unfortunately the film is flawed and at times the film feels a bit stupid in it's dialogue delivery. Some parts made me cringe. The Astronaut Farmer is an average feel good film with decent acting, and average plot. However it's clear that the script suffers, and the full potential of this picture is strained and has yet to realized. Good, but not great. The thing with this film is that they were plenty of opportunities to craft something pretty good, but the filmmakers decided to recycle old ideas, and at times the film feels rushed. Still decent entertainment.