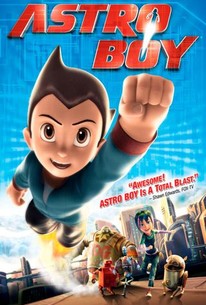 Critics Consensus: While it isn't terribly original, and it seems to have a political agenda that may rankle some viewers, Astro Boy boasts enough visual thrills to please its target demographic.

Critics Consensus: While it isn't terribly original, and it seems to have a political agenda that may rankle some viewers, Astro Boy boasts enough visual thrills to please its target demographic.

Critic Consensus: While it isn't terribly original, and it seems to have a political agenda that may rankle some viewers, Astro Boy boasts enough visual thrills to please its target demographic.

A young robot with incredible powers, super strength, and the purest spirit on the planet discovers the joys of being human while embarking on a worldwide journey to discover his true potential in this animated update of Osamu Tezuka's classic anime story. Astro Boy (Freddie Highmore) is a young robot from futuristic Metro City. Created by a brilliant scientist named Tenma (Nicolas Cage), and powered by pure positive "blue" energy that gives him such abilities as x-ray vision, inhuman speed, and flight, the wide-eyed android longs to find his true place in the world. He sets out on an epic journey that brings him face to face with an underworld army of robots and some of the strangest creatures ever to walk the Earth, and along the way learns to experience human feelings and emotions. Astro Boy's remarkable mission of discovery is suddenly cut short, however, when he learns that his friends and family back in Metro City are in grave danger. As Astro Boy prepares to face off against his greatest adversary in order to save everything he cares most about, he realizes that only through victory will he finally discover what it takes to be a hero. ~ Jason Buchanan, Rovi

Charlize Theron
as "Our Friends" Narrator

Bob Logan
as Stinger One

David Bowers
as Mike the Fridge

Sofia Bowers
as The Little Stinker

Nicole Fletcher
as "Oh No!" Kid

Tiffany Hillkurtz
as Bride to Be

Like its supersonic, jets-in-his-feet hero, the movie itself feels totally robotic.

The animation bar has been raised, and not just by Pixar. Poor little Astro Boy hasn't a prayer of clearing it.

Bowers's play-it-straight attitude towards the material combined with the crisp, if unspectacular, animation doesn't allow 'Astro Boy' a moment to bob its head above the ever-swelling digimation pack.

What makes this peppy kids' film interesting is the human/robot apartheid system that has evolved in the futuristic world that Astro inhabits.

It is a bold and even poignant idea and the movie certainly zips along. It's not in the Wall-E league, but it's well made and inventive.

Sci-fi digimation, whirling round the screen like the furniture in a drunkard's bedroom, whisks up the characters in its tornado.

I think the lyrics to the original 1960's series theme song sum it all up "CROWDS WILL CHEER YOU, YOU'RE A HERO, AS YOU GO, GO, GO, ASTRO BOY!"

A Japanese story famous for its illustrations now comes to the big screen with a touch of mystery and a lot of action for kids and adults. [Full review in Spanish]

Astro Boy may be an old-time favorite, but as directed by David Bowers with a screenplay by Bowers and Timothy Hyde Harris, it arrives here as fresh, invigorating entertain

He may be a reconstituted robot, but this little cyber-kid's got some real heart.

A charming and entertaining animated science fiction adventure that doesn't club us over the head with sensory overload...

Like TMNT, Astro Boy lacks originality and falls short of it's source material. So fans of the anime may be dissapointed but for the rest of us it's actually great to look at. It's not a great movie. But its a fun watch. It's a good kid's movie.

Astro Boy is a suitable first-entry into the SciFi genre, with all the charm, thrills and fun that its demographic needs in a classic premise of political morality straight from its source material. However, somewhere along the line when it was thrown through the "Hollywood/Pixar/Dreamworks" blender it comes out the other side as a bit of an emotional derivative for the older audiences. If anything? It could have (and should have) been hell of a lot darker. I guess the folks at marketing just couldn't bring themselves to making this cute little guy as mature and sophisticated as he was meant to be. Still, for what it is it's entertaining and more than watchable.

A very fun and entertaining, cg retelling of the classic anime and manga