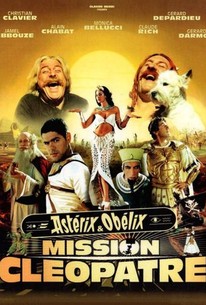 Based on the original '60s French comic books by René Goscinny, Astérix & Obélix: Mission Cléopâtre is the big-budget sequel to the 1999 box-office hit Astérix and Obélix vs. Caesar. Empress Cleopatra (Monica Bellucci) makes a wager with Julius Caesar (played by writer/director Alain Chabat) that her people can build a beautiful palace in three months. She chooses architect Numerobis (Jamel Debbouze) for the project, which must be completed in time or he will be fed to the crocodiles. Numerobis travels to Gaul to get help from the superpowered Panoramix (Claude Rich) and the warriors Astérix (Christian Clavier) and Obélix (Gérard Depardieu), along with their faithful pet Dogmatix. They use their magic potion to make the Egyptian slave-labor population into superheroes, thereby building the palace in no time. Meanwhile, the angry architect Amonbofis (Gérard Darmon) and Julius Caesar don't want to see them succeed. At the time of its release, Astérix & Obélix: Mission Cléopâtre was the most expensive French film ever made, with a budget of $50 million.

Dominique Besnehard
as the taster

Sam
as the croc

Avaris
as the crocs

Zinedine Soualem
as the tiler

Duran Duran
as Courtesans
View All

Despite the wealth of talent on the screen, the movie stays as flat as the cartoon strip from which it was adapted.

Big in a very Hollywood sense -- the kind of overblown, effects-laden comedy which, for much of the world, is virtually synonymous with Hollywood.

After the rather tame and lame first real Asterix movie this second part is somewhat of a pleasant surprise. The really pretty production design and the use of the beloved (side) characters leaves nothing to be desired. Especially the last 30 minutes are so full of crazy ideas, good jokes, movies quotes and (pop) culture references that it's a pleasure to watch. It almost feels as if the ghost of Leslie Nielsen's Naked Gun humor has traveled to ancient Egypt. If only the first half of the movie was just as hilarious and inventive. Overall silly but very entertaining and worth a look for fans of the comics.

This French adventure-comedy movie reminds me in my childhood based on the comic book. When I looked at Bellucci is so beautiful and sexy in her Cleopatra costumes.