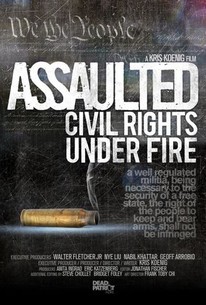 A documentary that brings audiences to the center of the controversy over the issue that is dividing our nation - gun control. Narrated by Ice-T, critically acclaimed rapper and actor, the film takes a critical look at current gun laws and the rising movement to restrict the rights guaranteed by our Second Amendment.

Like so much of current polarized communication, "Assaulted," wherever it is shown, is likely to be preaching to the choir.

A surprisingly thoughtful, well-researched attempt to give both sides of the argument respect while illuminating the long history of tensions surrounding gun ownership in America.

The documentary is predictable, stylistically stolid and about as focused as a pellet-gun blast.

The almost-complete absence of dissenting voices will likely limit its audience to gun-toting members of the choir, though anyone with an interest in the subject would be well-served by hearing its arguments.

While the film leans more heavily toward pro-gun ownership, finessing that position with a nod toward left-leaning politics, its real purpose is to bring some historical perspective to the argument, to move the conversation beyond emotion-based rhetoric.

There are no featured audience reviews yet. Click the link below to see what others say about Assaulted: CIVIL Rights Under Fire!