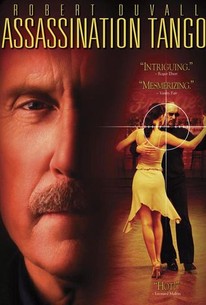 John J. is deeply devoted to his girlfriend, Maggie, and to her young daughter, Jenny. He is also passionate about dancing, a talent he hones at local Brooklyn dance halls. But his skill on the dance floor seems incongruous with his profession--John is a hit man, and a very good one. Hired to assassinate an Argentine general in Buenos Aires, John is met in Argentina by Miguel, who takes him to the home of a couple whose son the general had killed. But John isn't interested in pathos or politics. As he says, "There's two sides to every story." He just wants to do his job, do it well, get paid, and get home. But when the General unexpectedly delays his return to Buenos Aires, John's neat plans are trashed. Angry, alone, and with nothing to do until the General's return, John explores the city and soon discovers the rich and mysterious world of the tango. Enthralled, he watches the dancers in the clubs moving with a spellbinding combination of fire and ice, passion and precision. He is hooked and begins to insinuate himself into the life of Manuela, a charming, brilliant dancer who becomes his teacher and guide into the world of this new dance. Vacillating between his profession and newfound passion, John finally is able to complete his hit, only to find out the vengeful military has tightened national security like a noose. Spellbound by the rich and mysterious world Manuela has shown him, his idyll is shattered when the reality of why he's there comes crashing down around him. His chances of getting out of Argentina grow slim as he struggles to keep from being found and killed. As evading capture becomes ever more difficult and he finds himself alone with no one to trust, John desperately tries to find a way out of South America and back home.

Gustavo Pastorini
as Man at Bar

Danay Wilson
as Girl at Table
View All

Assassination Tango runs aground with an accumulation of small illogicalities.

A film that uses tango as a metaphor for life ought to generate some fire. But Assassination Tango offers little heat.

What we care about in Assassination Tango is the tango, not the assassination.

While the assassination plot is interesting, the rest of Tango is dramatically flaccid.

An ode to love and art while simultaneously a reminder of human frailty.

It is a form of condescension that Duvall could only perpetrate while being blinded by true love.

It's slow, but it's also sure-footed. Duvall takes it at his own damn pace, and his grouchy old man of a contract killer is a well-rounded and wholly believable personage.

More a song about living and dying well than a picture that makes much sense in the traditional definition.

I loved this film for what it didn't try to do.

There are no featured audience reviews yet. Click the link below to see what others say about Assassination Tango!