The Assassination of Jesse James by the Coward Robert Ford2007

The Assassination of Jesse James by the Coward Robert Ford (2007) 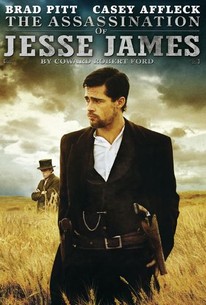 Critics Consensus: On the strength of its two lead performances Assassination is an expertly crafted period piece, and an insightful look at one of the enduring figures of American lore.

Critics Consensus: On the strength of its two lead performances Assassination is an expertly crafted period piece, and an insightful look at one of the enduring figures of American lore.

Critic Consensus: On the strength of its two lead performances Assassination is an expertly crafted period piece, and an insightful look at one of the enduring figures of American lore.

The Assassination of Jesse James by the Coward Robert Ford Photos

In 1881 a younger member of the notorious James gang becomes so inextricably drawn to and frightened of his mentor that his own delusions of grandeur force him to consider doing the unthinkable.

Writer-director Andrew Dominik takes his time with the story, but his languorous pacing allows tension to build -- and permits the actors, Affleck in particular, to add nuance and depth to characters who'll seem familiar only at first glance.

The Assassination of Jesse James by the Coward Robert Ford is the story...of the moment in America when myth was murdered by mere celebrity and we were left, perhaps forever, with only the latter's meager consolations.

When Ford finally pulls the trigger, it's a relief as the flick's final ten minutes spin into actually interesting terrain

Moseying along for 160 minutes, this revisionist western by writer-director Andrew Dominik makes a wan attempt to present the Jesse James legend as the dawn of celebrity culture in America.

For all its intended depth and psychological realism, which at its best carries reminders of the work of Terrence Malick, there's a fake myth-making quality to it that, because of its inordinate length, could be mistaken for grandeur.

Compared to Walter Hill's 1980 movie The Long Riders, also about the James gang, this feels an underpowered affair. Indeed, compared to Dominik's own previous movie, Chopper (2000), it is impossibly meek.

Imperfect, beautiful, overloaded and redundant, it is one of those films that will still be remembered and analyzed in ten years. [Full Review in Spanish]

An essential American Western that deserves to be ranked among the greats.

Stands as perhaps the greatest inquiry into the myth of the "Old West."

Affleck manages to strike so many right notes, that by the end of the film, it is easy to forget what a loathsome toady he was at film's start, and you cannot help but feel real pain as Ford's inevitably sad fate unravels before our eyes.

Examining the transient nature of memories and mythmaking, "Coward" understands there are as many crooked legacies in high definition, as there were 130 years ago in dog-eared dime-store paperbacks and ghoulish stage productions.

Meticulously made, with some beautiful images, but far too long and far too languidly paced.

It's long, it's slow, and I loved it. The cinematography practically speaks for itself, telling a story that we all know from the villain's perspective and bringing the psychology of the event and the characters to life.

This is quite a fascinating take on such a revered legend and the final months of his life. Less of a violent shoot 'em up, and more of a somber, introspective portrait, this film is a fascinating study of friendship, betrayal, hero worship, and surprising reactions to a perceived act of greatness. There are some undeniable undertones of homosexuality throughout the film, but rather than be expressed through physical love, they are expressed through tortured, creepy obsessions that can't come to any conclusion but a dark and tragic one. Before I provide further praise, a few criticisms. I'm okay with long films with rather slow pacing, but I felt the middle should have been tightened up more, and have the final half hour drawn out more. As for the final scene, I'd rather have seen it than heard narration. The rest of the narration was hit or miss for me. I liked the music, but I wish it were more varied. More screen time for Zooey Deschanel would also have been nice, as would have been a few more (no more than 3) small scenes of violence, or one big set piece of it. As much as I enjoyed the direction (despite the above issues), the cinematography by Roger Deakins is the real star of the show here. Some of the shots and compositions on display are so beautiful I can't really do them justice. The cast is great, even if some of the actors have little screen time. Despite screen time amounts, all performers are excellent, especially Pitt and Affleck. Renner and Rockwell are closely tied behind them for the best acting. About Pitt and Affleck: it's a toss-up for who's more impressive. Pitt, on one hand has to portray someone younger than his actual age, pull it off, and also downplay his ego and status as an A-lister. It works to his favor. Affleck on the other hand, much like the character, has to step out of the role of "the young one" and come into his own. Ford is a tough role because it would be so easy to over do it. His Oscar nomination is proof he succeeded. This was my first exposure to director Andrew Dominik, and he has impressed me. At first it seemed like this was a Terrence Malick film, and I mean that as a compliment, but also as a way of saying what you should expect should you decide to see this (and you should). This is a great film, but definitely not for all audiences. It's a scholar's dream too, as there is plenty of stuff to pore over, analyze, and discuss. If you've come this far in my review, then you'll probably know if this is one for you.

In 2000, director Andrew Dominik exploded onto the scene with low-budget but powerful biographical film "Chopper" about Australian criminal Mark Brandon Read. It not only heralded the arrival of actor Eric Bana but also a new an uncompromising director. For his second feature he tackled another biographical feature about one of the wild west's most notorious gunslingers and this time, Dominik took his uncompromising nature even further. Retelling of the last months in the life of the legendary outlaw Jesse James and how his reputation was faltering. His gang had disbanded - either dead or in prison and Jesse was beginning to suffer increasing paranoia. After carrying out a train robbery he heads for Kentucky, only to reappear in Missouri for a bank robbery. Two brothers; Charley (Sam Rockwell) and Robert Ford (Casey Affleck) are part of his new gang but Robert has a dangerous and obsessive idolisation of Jesse and one that would finally be the outlaws undoing. Few film's ever get away with having a title as long as this one and even fewer get away with the manner in which this film is made. That's testament to the skill of Andrew Dominik and the backing of Brad Pitt who refused to yield to Hollywood studios when they wanted to tinker with Dominik's vision. Right from the opening, brutal, train robbery, this film's style is apparent. It's sense of realism is what commands your attention; it goes on to depict stark expansive landscapes, explosive bullet wounds and guns that don't shoot straight but the actual gunslinging is kept to a minimum, while it focuses on the characters themselves. The pace of the film is deliberate, adding to the ethereal feel throughout and one that reminded me of the approach that director Terrence Malick would use. Roger Deakins' cinematography is also a thing of absolute beauty. The entirety of every single frame of this picture is stunningly captured with meticulous attention to detail and Dominik's direction is near flawless. He lingers long on shots and subtle facial expressions and captures the uneasiness in the characters and their situations. By using this methodical style, he manages to get under the skin of his two leading characters and allows both Pitt and especially Affleck the room to deliver sensational performances. Pitt is entirely commanding and charismatic, adding just enough of a glimmer of danger without losing the audience's sympathy and Affleck is on top, creepy and unsettling, form. The chemistry between the two hints at all sorts of possibilities - including homoerotic tension. These two share an uneasy relationship and between them, there are contemporary issues at play; the nature of celebrity and hero worship and the difference between 'the man and the myth'. Even over 100 years ago they had this but although Dominik delivers this insight, he never fully explores it, leaving it all just a bit too ambiguous. I'm not looking for a film to spell everything out for me. On the contrary but for a film that languishes on detail and mood, it could have taken a little time to further explore these themes and the characters' motivations. There's a sense of bewilderment as to why James would even tolerate having Ford around when he, seemingly, knew that something wasn't quite right about him. He was aware that sooner or later he would meet his impending fate but it's unclear why he'd open himself up to it. Another area that lacks any attention, is the females in these men's lives. They are fleetingly visited but are ultimately insignificant and the likes of Mary-Louise Parker and Zooey Deschannel are reduced to mere cameos. I can only assume that these issues could maybe make more sense in Dominik's original 4 hour cut - that played at the Venice film festival before a widespread release reduced the film to it's 2hour 40mins duration. That being said, this is still an aesthetically successful endeavour that, although not fully deserving of the masterpiece status that many consider it to be, it's not far off it. A contemplative and demanding film that requires the utmost patience. It's highly ambitious, artistic and regularly poetic. Quite simply, it's beautifully done and I found lots to admire but it meanders and like the title itself, it's just a tad too long winded.

The Assassination of Jesse James by the Coward Robert Ford Quotes