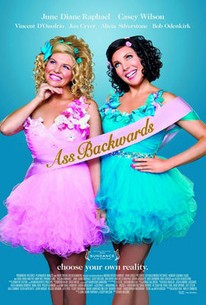 Critics Consensus: June Diane Raphael and Casey Wilson are sharp comedic performers, but their co-written script gives them little to work with in this meandering farce.

Critics Consensus: June Diane Raphael and Casey Wilson are sharp comedic performers, but their co-written script gives them little to work with in this meandering farce.

Critic Consensus: June Diane Raphael and Casey Wilson are sharp comedic performers, but their co-written script gives them little to work with in this meandering farce.

Kate (June Diane Raphael) and Chloe (Casey Wilson) are two childhood best friends who met when they placed dead last in their hometown beauty pageant. Now they are all grown up and living in New York City, where Chloe works as a "girl in a box" at a nightclub and Kate is a CEO....of her own one-woman egg donor "corporation". Lost in delusion, they believe they are living large until an invitation to their hometown pageant arrives and their past comes back to haunt them. Join these two loveable losers as they take an ass backwards journey home to reclaim their crown, stopping off at a women's separatist commune, an amateur strip club competition, and meeting their favorite reality TV star along the way. (c) Gravitas

Ill-advised and amateurishly executed, Ass Backwards begins with a passably funny concept and runs it into the ground within 20 minutes.

As with any kind of episodic or sketch comedy, some gags land more effectively than others, although you'll likely find a line or a beat or an image that makes you laugh from start to finish.

The road adventures they have along the way aren't funny, and once they reach the pageant, the comic payoff you're hoping for never materializes.

Where movie comedy teams once required a "straight" member - or so-called normal characters - off which to bounce stupidity or silliness, Raphael and Wilson believe total immersion in thickheadedness and failure is riot enough.

Raphael and Wilson are impressively committed to these misadventures, but it's a shame the movie is so cruel to the characters.

Ass Backwards overcomes the obvious beats with clever, occasionally dark jokes that reveal the sharpness of its stars' writing.

The movie's one joke is that they don't quite realize how pathetic they are. This kind of joke could work if the characters were charming and had the ability to win over other characters, but these women remain stupid and annoying throughout.

It helps that Wilson and Raphael both come from sketch comedy. They're well-versed in hyper-specific characters -- and ones we want to spend more time with, just to see what trouble they weasel their ways into. R

With a script so painfully unfunny it's hard to imagine that Raphael and Wilson (who got some of their funding for the film through Kickstarter) never had anyone tell them they were working with absolute dreck.

Chris Nelson's Ass Backwards certainly doesn't aspire to being anything more than passing entertainment. But sadly, this listless, flat, and exceptionally derivative movie doesn't even achieve that modest goal.

It's a little slapdash, a little flimsy, and doesn't seem to quite know what it wants to be at times, but it's good to see Raphael and Wilson get the chance to finally carry something for once.

Ass Backwards is a film that is all-at-once hilarious, intelligent, poignant and accessible.

There are no featured audience reviews yet. Click the link below to see what others say about Ass Backwards!