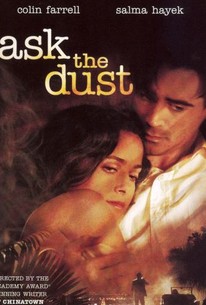 Critics Consensus: Though Hayek is luminous, Farrell seems miscast, and the film fails to capture the gritty, lively edginess of the book upon which it's based.

Critics Consensus: Though Hayek is luminous, Farrell seems miscast, and the film fails to capture the gritty, lively edginess of the book upon which it's based.

Critic Consensus: Though Hayek is luminous, Farrell seems miscast, and the film fails to capture the gritty, lively edginess of the book upon which it's based.

Adapted from a novel by John Fante, Robert Towne's Ask the Dust stars Colin Farrell as Arturo Bandini, a young writer who comes to Los Angeles during the Great Depression in order to write a novel. As the film opens, he is down to his last nickel and decides to spend it on coffee in a diner. He is served by Camilla (Salma Hayek), a Mexican beauty he is instantly attracted to even though he treats her horribly during their first interaction. Soon the pair is involved in a relationship that finds them sparring with each other at first, but slowly learning to trust each other. Bandini meets the acquaintance of a desperate woman who sees him as the most desirable man in the world. Eventually Arturo and Camilla get away from the city and their love deepens as he attempts to finish his novel. Donald Sutherland co-stars as a seedy but helpful and loyal neighbor.

Richard Schickel
as Voice of Mencken

Dion Basco
as Patricio/houseboy
View All

Critic Reviews for Ask the Dust

It is a odd-sounding, odd-looking piece of work, not uninteresting by any means, but there is something a little forced in both lead performances.

Like the desert beyond, the film is arid and airless.

Something is missing, though. The themes are all there, but the movie doesn't cross the blood-brain barrier and rev you up.

Farrell and costar Salma Hayek have rarely been so affecting, or so effective, as self-hating ethnics who find love.

Who would have guessed that Robert Towne, the writer of Chinatown, could make a movie as awful as Ask the Dust? It has it all -- one-dimensional characters, one-dimensional set and idiotically arch dialogue.

Director Robert Towne and cinematographer Caleb Deschanel have creatrd a pretty picture but forgot to inject some life into it.

Donald Sutherland saunters onscreen, momentarily raising the level of the film, before he ambles back out the door and things sink back down to the listless and pointless pace that typifies this jumbled mess of a movie.

Supporting characters float in and disappear without rhyme, reason or resolution.

Towne has a perhaps unique ability to make this ill-fated movie romance classically seductive while doing full justice to its authentic subject. [His] canniness as a writer and casual sophistication do wonders for the actors.

Joseph Proimakis
Movies for the Masses
View All Critic Reviews (103)

Audience Reviews for Ask the Dust

Robert Towne's uneven character study has sparse great moments, but there were enough strong ideas to keep me engaged. This is a flawed piece that requires a lot of patience, especially considering the fact that its first act is its weakest. However, the unorthodox protagonist and sexual energy keep it afloat enough for its positive elements to shine through. Colin Farrell, who is a consistently impressive actor, is not given enough credit for his talent. He does quite a good job in this, and Salma Hayek turns in a respectable performance too. If you're willing to overlook its faults, it's an engaging watch.

"I looked for Camilla everywhere,and everywhere I looked,all the faces seemed like mine.Tight. Worried. Lost. Faces with the blood drained away.Faces like flowers torn from their roots,the colors fading fast."

this film wanted to be great, and could have been so, but it missed the mark. at least average, it failed with oddities of the story and uncomfortable moments that were unneccesary to the plot. the premise was great but it missed on most everything else.

[font=Century Gothic]In "Ask the Dust", it is the 1930's when Arturo Bandini(Colin Farrell) has had a story published in H.L. Mencken's magazine, American Mercury. With the $150 he receives, he moves from Colorado to Los Angeles where he seeks to pursue a career as a writer. Only one problem: he is an inexperienced young man and has nothing to write about despite the rich palette happening just outside of his window. He is soon down to his last nickel and decides to spend it on a coffee at a local bar. However, the coffee is downright awful and he gets into a running argument with a beautiful waitress, Camilla(Salma Hayek).[/font] [font=Century Gothic][/font] [font=Century Gothic]In "Ask the Dust", 1930's Los Angeles is a place for people to get a new start but too many of them just recreate their old lives and even worse, bring their old prejudices along for the ride. And even Arturo and Camilla cannot escape this. [/font] [font=Century Gothic]"Ask the Dust" is an adequate movie that starts well but slows down to a crawl and becomes predictable. But it is evocative in recreating 1930's Los Angeles and Colin Farrell gives his best performance to date. [/font]