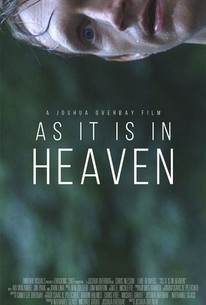 As It Is In Heaven Photos

After the death of the Prophet, a man is called to lead his small religious sect as they anxiously await the end of the world they were promised. Director Joshua Overbay deftly leads audiences down a twisting path of passion and devotion, envy and manipulation in this sympathetic portrayal of a modern-day cult leader and his spiritual convictions. Devoted to a simple life of faith in unforgiving Kentucky backcountry, a small religious sect seeks spiritual awakening as their Prophet (John Lina) nears death and his son, Eamon (Luke Beavers), prepares to step forward as their new leader. But, in his last moments, the Prophet instead names newcomer David (Chris Nelson) as his spiritual successor. -- (c) Cinema Purgatorio

Critic Reviews for As It Is In Heaven

Never as tense and gripping as it should be, the incidents and most of the performances too tamped-down to spark a much-needed sense of animating friction.

Written with less-is-more simplicity by Ginny Lee Overbay, "As It Is In Heaven" grows ever more devastating ...

Director Overbay, working from an effective screenplay by his wife Ginny Lee Overbay, slowly ratchets up the tension in quietly compelling fashion.

Overbay's palette is carefully lyrical, at a benumbed Martha Marcy May Marlene pitch, he pays attention to the verdant landscape and keeps his cast at a pensive and watchful low boil.

"As It Is in Heaven" ultimately doesn't go anywhere unexpected, but it does foster a potent, unexpected bond between its subjects and its audience.

A disquieting film about testing faith.

This suspenseful film was shot without any special effects over the course of 17 days. This is powerful filmmaking, admirable for the resourcefulness of the artists.

Even if As It Is in Heaven doesn't have the distinction of treading entirely untrodden ground, it does offer a compelling and engrossing take on the subject -- and from a fresh, up-and-coming filmmaking voice, to boot.

For the most part this movie joins other recent cult studies in identifying the apocalyptic simmer that runs beneath current American culture.

The largely subdued movie could use a little obsessive visionary madness of its own, but Chris Nelson, the replacement guru, has an Opie-gone-Jonestown look that gets freakier as the movie progresses.

This low-budget debut by Joshua Overbay cooks a surprising amount of tension from the barest minimum of ingredients.

Audience Reviews for As It Is In Heaven

There are no featured audience reviews yet. Click the link below to see what others say about As It Is In Heaven!

As It Is In Heaven Quotes