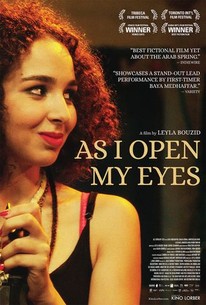 This music-filled, French-Tunisian production is set in Tunis, summer 2010, a few months before the Revolution, and depicts the clash between culture and family as seen through the eyes of a young Tunisian woman balancing the traditional expectations of her family with her creative life, as the singer in a politically charged rock band. Director Leyla Bouzid's feature offers a nuanced portrait of the implications of the Arab Spring on the lives of young people in the region, while also creating a complex story about a young woman using art to transform her reality.

Marwen Soltana
as Sami
View All

It Follows, A Series of Unfortunate Events, and More Available on Netflix, Amazon Prime, and FandangoNOW
Sully Is Certified Fresh

Director Leyla Bouzid may struggle to shape her narrative in the final reels, but through most of its running time her first feature pulses with in-the-moment vitality.

As I Open My Eyes feel like two films rather oddly stitched together.

"As I Open My Eyes" is best when it observes the fraught but loving mother-daughter relationship between Hayet and Farah.

Bouzid has joined the ranks Arab female filmmakers worth keeping tabs on.

This appropriately somewhat scruffy feature derives a lot of its energy from a spunky lead performance by newcomer Baya Medhaffer, while the story is emotionally grounded by the warm presence of Ghalia Benali.

This debut feature earns its grown-up wisdom without selling out its youthful idealism.

"A very conventional family melodrama whose main contribution is the social context in which it takes place".

Full of energy, lots of songs.

As I Open My Eyes: an expertly woven story exploring sexuality, mother-daughter relationships, a country at war with itself and a young girl caught up in the middle of it all.

The film is a strong debut from a talented writer and director to watch.

The film's poignant music (composed by Khyam Allami) embodies this dualism with sounds and styles simultaneously traditional and modern, joyful and outraged, and hypnotic and sobering.

A film that explains the Arab Spring better than any documentary. My pick for the best foreign film of 2016 for now. I doubt that anything will surpass it.

There are no featured audience reviews yet. Click the link below to see what others say about As I Open My Eyes (À peine j'ouvre les yeux)!