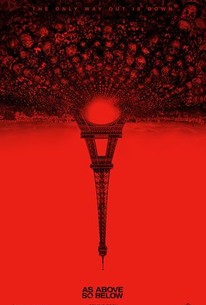 Critics Consensus: After an intriguing setup that threatens to claw its way out of found-footage overkill, As Above/So Below plummets into clichéd mediocrity.

Critics Consensus: After an intriguing setup that threatens to claw its way out of found-footage overkill, As Above/So Below plummets into clichéd mediocrity.

Critic Consensus: After an intriguing setup that threatens to claw its way out of found-footage overkill, As Above/So Below plummets into clichéd mediocrity.

As Above, So Below Photos

Miles of twisting catacombs lie beneath the streets of Paris, the eternal home to countless souls. When a team of explorers ventures into the uncharted maze of bones, they uncover the secret of what this city of the dead was meant to contain. A journey into madness and terror, As Above, So Below reaches deep into the human psyche to reveal the personal demons that come back to haunt us all. Written by John Erick Dowdle and Drew Dowdle (Quarantine, Devil) and directed by John Erick Dowdle, the psychological thriller is produced by Thomas Tull, Jon Jashni, Drew Dowdle and Patrick Aiello. Alex Hedlund serves as the executive producer. (C)Universal

Hamid Djavadan
as Reza
View All

News & Interviews for As Above, So Below

New on DVD & Blu-Ray: Dawn of the Planet of the Apes, The Hundred-Foot Journey, and More
RT Podcast: Ep. 048 – New movies, plus John Erick & Drew Dowdle
Critics Consensus: The November Man is Slick But Convoluted

View All As Above, So Below News

Critic Reviews for As Above, So Below

Once upon a time, when someone in a horror movie turned a doorknob or drove toward a storm, you got to feel superior and shout, "Don't go in there!" Now it's more like, "Seriously? You're not gonna put down that camera first?"

Once the characters go underground, things start happening. Not scary things, mind you, but things.

The movie's signature signage - "Abandon all hope, ye who enter here" - is the only instruction we really need.

"As Above, So Below" is novel enough to be worth the price of admission, but you'll think twice before getting back in line for a second visit.

While the film has a reasonably engaging cast and some decent scares, the script feels like an uneasy blend of The Blair Witch Project and Tomb Raider.

Any inventiveness of As Above So Below wears off early on, but one would be remiss to not credit the film with at least generating a few scares, even if it doesn't live up to its potential.

The claustrophobic among us, in particular, will be put through the ringer. But Dowdle and crew can't quite piece together enough quality moments to deliver a memorable chiller.

Despite the obvious banal traps it falls into, it offers an hour and a half of solid entertainment and a couple of scary moments. Fans of the genre will likely lap it up with glee.

Nothing more than your typical horror film, with the cast dwindling to faceless pawns set up to create the next scare.

As Above, So Below is often a lot of fun in its excited historical notations and it certainly provides a view of Paris not often seen. It's not a brilliant horror film, but it's decent and has enough unique elements to recommend it.

Dowdle has the skills to bring the best out of an enclosed setting à la Neil Marshall's fantastic The Descent. Shame the similarities end there.

Audience Reviews for As Above, So Below

Dan Brown meets The Blair Witch Project in this harrowing and well-acted horror movie that makes great use of a subjective camera to create an intense feel of claustrophobia, taking a simple premise and fleshing it out into a terrifying, nerve-fraying descent to hell.

It's dumb. It's really really really dumb. But it's not boring, and boring is the worst thing a movie can be. I actually can't remember the last time I was this entertained by a found footage horror. Probably The Last Exorcism five years ago. Now "good for a found footage horror" may not exactly be the highest praise, but As Above, So Below is still worth a watch for genre fans.

Awesome idea... Bad idea... While I was again excited for the hype behind the idea, and to see Cloverfields own behind the camera again.. Found footage films are starting to lack alot of effort and thrill they usually give me.

Spectacular sound design and an interesting set-up will have you hooked on "As Above, So Below," but never will I recommend this film to anyone, because by the end, it is just a waste of time. Sadly, this film get's so swallowed up in it's plot details that it has nowhere left to go by the end and it just ends with so many unanswered questions. As a student interested in finding the "Philospher's Stone" tunnels in the catacomb's of Paris, she brings a group of specialists with her in order to uncover the secrets of the caves. Sure, the premise is intriguing, the acting is believable, and the sound of the film may be striking, but with a run-of-the-mill screenplay and not enough imagination, "As Above, So Below" is just another film with extremely wasted potential. I had no interest going into this film, and about halfway through all of those thoughts began to change, but sadly, it goes nowhere. To horror fans, you can get a few chilling moments out of this movie, but I would not bet on it being groundbreaking. Intriguing but disappointing.

As Above, So Below Quotes