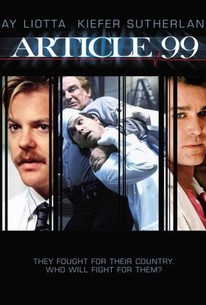 This film's title refers to a fictional legal loophole which states that American veterans cannot be treated in VA hospitals unless their illnesses are related to military service. The pinchpenny administrator of a Kansas City hospital intends to follow this proviso, while his irreverent staff tries to circumvent the rules.

Kathy Quinn
as Nurse in Cafeteria

Ann Redow
as Nurse in Bathroom

Article 99, which wants to be the MASH of veteran's hospitals, filled me with a great unease as I was watching it.

Article 99 is too good to be true -- even with its mildly stinging epilogue.

It tries to be satirical and valiant, but doesn't quite get there.

Scores some good points with its moral condemnation of an institution that puts saving money ahead of saving lives.

Wasnt bad, I thought it would be alot better considering the cast. Loved when Keifer donned the floppy hat as his father did in M.A.S.H

A very entertaining film about the innovative means by which doctors in a veterans hospital try and actually help the patients,while being thwarted by bureaucratic red tape at every turn.

If you haven't seen this movie then I recommend it, kinda like a modern day M*A*S*H, but instead of a far off distant country the war is right here at home, as a group of doctors have to break every rule in the book to defeat a corrupt system and get America's war veterans the treatment they deserve.