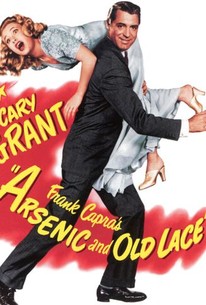 Arsenic and Old Lace is director Frank Capra's spin on the classic Joseph Kesselring stage comedy, which concerns the sweet old Brewster sisters (Josephine Hull, Jean Adair), beloved in their genteel Brooklyn neighborhood for their many charitable acts. One charity which the ladies don't advertise is their ongoing effort to permit lonely bachelors to die with smiles on their faces--by serving said bachelors elderberry wine spiked with arsenic. When the sisters' drama-critic nephew Mortimer (Cary Grant) stumbles onto their secret, he is understandably put out--especially since he has just married the lovely Elaine Harper (Priscilla Lane). Given the homicidal tendencies of his aunts, the sinister activities of his escaped-convict older brother Jonathan (Raymond Massey) and the disruptive behavior of younger brother Teddy (John Alexander)--who is convinced that he's really Theodore Roosevelt, and runs around the house yelling "CHAAAAARGGGE"--Mortimer isn't keen on starting a family with his new bride. "Insanity runs in my family," he explains. "It practically gallops." Further complications ensue when the murderous Jonathan Brewster arrives home, with his snivelling accomplice Dr. Einstein (Peter Lorre) in tow. When Jonathan learns that his darling aunts have killed twelve men, he is incensed--they're challenging his own record of murders. Though the movie rights for Arsenic and Old Lace were set up so that the film could not be released until 1944, director Capra shot the film quickly and inexpensively in 1941, so that his family could subsist on his $100,000 salary while he was serving in World War II.

Lee Phelps
as Umpire
View All

Despite the fact that picture runs 118 minutes, Frank Capra has expanded on the original play [by Joseph Kesselring] to a sufficient extent to maintain a steady, consistent pace.

The timing is abysmal throughout, turning fast pace into numbing frenzy.

The film was adapted from a successful stage play and it comes across as very theatrical on screen, but once you get past that, there's an enjoyable lunacy to the whole thing.

Unable to conceal the film's theatrical origins, Capra misfires as a director and misguides Cary Garnt, who's too mannered, but the time, the combo of horror and comedy was new and the old ladies' gruseome hobby was shocking to audiences.

Charge! off to see this classic Capra screwballer.

has stood the test of time to remain as funny today as anything Hollywood is producing now.

While this madcap drawing room comedy rests on the shoulders of the ever charming mr. Grant, who does more doubletakes here than in any other feature he may have done, there is actually quite a lot to be said for the obvious fun being had by the heavies, Raymond massey and peter lorre, who chew scenery with the best of them and look as if they're restraining themselves from outright giggling during their scenes together. Rightfully one of the best of this genre.

While the first half hour is exceptionally hilarious (with Cary Grant displaying a perfect comic timing there), this madcap dark comedy soon resorts to irritating, over-the-top mass hysteria, with everyone yelling around without rest, killing what made it so funny in the beginning.

Way too theatrical for my taste. I couldn't stand watching it anymore, so I turned it off after watching the first hour.

A newlywed discovers that his aged aunts have been poisoning lonely bachelors as his brother returns with a body to hide. This is a shallow but enjoyable farce. Cary Grant runs about and contorts his face in all the shapes required by the genre, and Josephine Hull and Jean Adair are delightful in their naivete. This isn't substantive comedy, but it's well-plotted and energetic. Overall, I enjoyed Arsenic and Old Lace for its madcap fun as it's a decent way to while away a couple hours.