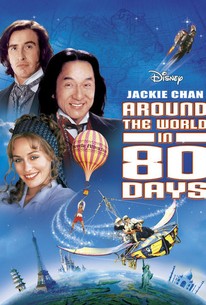 Around the World in 80 Days Photos

A tale that centers around three unlikely heroes as they attempt to settle an outrageous wager. An eccentric London inventor, Phileas Fogg, has come up with the secrets to flight, electricity, and even roller-blades, but the world has dismissed him as a crackpot. Desperate to be taken seriously, Fogg makes an outlandish bet with Lord Kelvin, the head of the Royal Academy of Science: to circumnavigate the globe in no more than 80 days! With his two sidekicks--Passé partout and femme fatale Monique--Fogg is headed on a frantic, heart-pounding round-the-world race that takes our heroes to the world's most exotic places by land, sea, and air. Along the way, our heroes face many adventures and obstacles from an all-star cast that land them in comedic predicaments, and exhilarating action.

Tom Strauss
as Academy Member No. 2

Kit West
as Academy Member No. 3

Will Forte
as Young Bobby

Tung So
as Scorpion Gang

Critic Reviews for Around the World in 80 Days

Director Frank Coraci plays fast and loose with Jules Verne's classic tome Around The World In 80 Days, but his adaptation never runs out of gas.

It was exactly what I expected and that's something I didn't really want to see.

Around the World in 80 Days is never as delightful and silly as it needs to be.

The gags are physical but rarely funny.

Has that cheesy, chintzy mid-Florida feel that we all know and love, despite its $110 million budget.

I was amazed at how little actually happens for a movie with so much action.

It's ironic that this film is less about traveling and more about beating the crap out of people all over the world.

The heart and soul of it, the story and the casting, are a complete mess.

...Fogg essentially winds up playing second-banana to Passepartout - a disastrous choice that simply does not work.

Audience Reviews for Around the World in 80 Days

[My predicted rating 2.5] I would never have chosen to watch this film and yet it did have a fair bit of entertainment value. There were some good effects throughout the film and of course some good Martial Arts choreography from Jackie Chan, in fact even the usually irritating Steve Coogan did a good job - a good adventure!

One of my all time favourite films. Really funny and I haven't seen the original but this has got to be one of the best remakes. Arnold's cameo is amazing!

Around the World in 80 Days Quotes