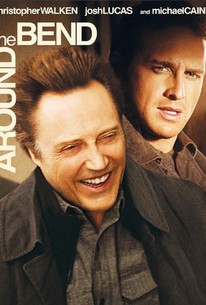 Critics Consensus: Around the Bend sets a destination of earnest generational drama, but settles for the most derivative route to get there, veering off course into trite sentimentality.

Critics Consensus: Around the Bend sets a destination of earnest generational drama, but settles for the most derivative route to get there, veering off course into trite sentimentality.

Critic Consensus: Around the Bend sets a destination of earnest generational drama, but settles for the most derivative route to get there, veering off course into trite sentimentality.

Around the Bend Photos

Four generations of an American family are brought together by difficult circumstances while facing some unpleasant truths in this drama. Henry (Michael Caine) is an elderly man in failing health living in a small town in the Southwest, where he's cared for by his live-in nurse (Glenne Headly). As Henry's condition grows worse, he's joined by his son Turner (Christopher Walken), his grandson Jason (Josh Lucas), and his great-grandson Zach (Jonah Bobo). As the four men deal with Henry's illness, they also try to come to terms with a lifetime's worth of differences between them. Around the Bend is the first feature film from writer and director Jordan Roberts.

Michael O'Neill
as Cowboy
View All

News & Interviews for Around the Bend

View All Around the Bend News

Critic Reviews for Around the Bend

In the end Around the Bend isn't an awful movie. It's merely forgettable.

A sentimental journey, to be sure, but is saved by bleakly humorous moments.

In Michael Caine and Christopher Walken and Josh Lucas, [Roberts has] surrounded himself with a first-rate cast who, with one exception, seize the day.

Walken manages to deliver something pure and heartfelt here. Unfortunately, he's doing so in a film weighed down by coincidences and quirks.

Seems to think it's extra-crunchy, but winds up a pretty regular affair.

When traveling the American Southwest, there are bound to be many KFC locations around the bend to feed you along the way.

...in many ways the softer scenes have more punch to them than any of the emotional confrontations or dramatic revelations

Oozes sentimentality for the plight of these mildly eccentric characters... The problem isn't the film's gooey center but the flavorless, formulaic substance surrounding it.

There's not much happening even when the viewer eventually gets around the bend.

Audience Reviews for Around the Bend

An experienced cast lifts this "quirky" family drama about redemption just above been there done that, but only just. Walken and Caine, of course, are the standouts.

Never Judge A Film By Its Cover, I have seen this film on the shelves 100 times and passed it up. I'm not a big Christopher Walken Fan, but I do enjoy Michael Caine. So I finally decided to watch this one and what I saw was a very enjoyable movie with a great sound track. About a father (Michael Caine) who only last wish is to see his son (Christopher Walken). Soon after he appears dies and before he dies he leaves his son, grandson and great grandson instructions for a road trip, which makes the movie most enjoyable. The purpose is to get these three back together. All died a fabulous job, 4 1/2 stars 4-21-12

Cast: Christopher Walken, Michael Caine, Josh Lucas, Glenne Headly, Jonah Bobo, David Eigenberg, Robert Douglas, Carlos Cabarcas, Gerry Bamman, Jean Effron, Lily Knight, Rick Negron Director: Jordan Roberts Summary: Four generations of men are suddenly brought together by the chance to uncover the truth about their family's past. When their eldest member passes away, the remaining trio embarks on a journey that takes them out on the road and into a world full of surprises -- some comic, some dramatic, and all of them personal. My Thoughts: "Really loved this movie. It was a mans movie with some male bonding going on, but definitely sentimental for the gal's. Such a great cast of men in this movie. I am a sucker for road trip movies, and this was a great one.The story is good, the acting is great, and the concept of Henry's will is funny and original. I enjoyed the entirety of this film. It had a great mix of humor, sadness, and drama. It's a road trip to forgiveness. See it if you haven't yet."

A terrific film. I loved every minute of it. Truly wonderful and outstanding. A great story of family and redemption. An astonishing masterpiece of the finest for drama. It's funny, touching and powerful. Compelling, riveting and unforgettable. Josh Lucas and Christopher Walken are fantastic. A great pair, their chemistry is so true, honest, complex and remarkable. Walken is outstanding, one of his best performances ever. An excellent soundtrack filled great old tunes. Deeply moving and utterly heartbreaking. A delightful and terrific road trip that cant turn away from.

Around the Bend Quotes