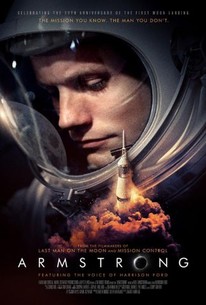 ARMSTRONG is a dramatic and emotional documentary that features never-before-seen family home-movie footage, along with still and moving images that chronicle Neil Armstrong's incredible life. With the support of the Armstrong family, including his two sons Rick and Mark, the film details his near-death experiences as a fighter pilot in Korea, his test pilot days, the drama and excitement of the Gemini 8 and Apollo 11 missions, and the challenges that followed his extraordinary fame. The film will launch into theaters and on demand July 12th to coincide with the 50th anniversary of the first moon landings.

Stuber Is a Bumpy Ride

The movie is sleek, smart, and reasonably thorough, and it offers the enticement of never-before-seen home movies provided by Armstrong's family.

With the 50th anniversary of man's first steps on the moon just days away, movies dealing with the event have been thick on the land for awhile. But even if you think you've seen enough, "Armstrong" is worth your time.

This retelling of the Neil Armstrong story has been eclipsed by superior studies of his historic lunar mission.

There are several points throughout "Armstrong" that feel sluggish... but it does manage to soar (please forgive the pun) once it actually brings the audience to the moon with Armstrong, Aldrin, and command module pilot Michael Collins.

It's all watchable enough but hardly a giant leap for documentary making.

It's not remarkable in terms of craft... but they do get some amazing interviews.

Armstrong's shortcomings are exacerbated by unflattering comparisons. Rather than looking skyward, Armstrong awkwardly looks at its feet, the film eclipsed by other efforts both fictional and factual.

It's a worthy celebration of the fiftieth anniversary of the moon landing and of the man who took the one small step that was also a giant leap for mankind.

Armstrong is a worthy biography and a solid way to mark the anniversary [of the Moon walk].

Much of the story falls on his family and colleagues and this lack of deeper probing means that the movie falls into retelling of the NASA mission.

David Fairhead's portrait of Neil Armstrong has a slightly less demonstrative hero, but still finds examples of his genial nature.

It excels in showing how Armstrong remained calm and capable in some truly astonishing situations.

There are no featured reviews for Armstrong at this time.