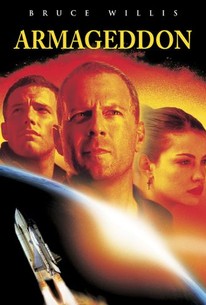 Critics Consensus: Lovely to look at but about as intelligent as the asteroid that serves as the movie's antagonist, Armageddon slickly sums up the cinematic legacies of producer Jerry Bruckheimer and director Michael Bay.

Critics Consensus: Lovely to look at but about as intelligent as the asteroid that serves as the movie's antagonist, Armageddon slickly sums up the cinematic legacies of producer Jerry Bruckheimer and director Michael Bay.

Critic Consensus: Lovely to look at but about as intelligent as the asteroid that serves as the movie's antagonist, Armageddon slickly sums up the cinematic legacies of producer Jerry Bruckheimer and director Michael Bay.

Michael Bay (The Rock) directed this science fiction action thriller in the When Worlds Collide tradition. After astronomy students discover a comet-asteroid collision, an asteroid fragment "the size of the Super Dome" threatens. It's destroyed by a secret USA defense in space, but a large chunk veers off toward Singapore. With another asteroid "the size of Texas" en route, a plan is devised to send oil drillers to land on the asteroid and drop a nuclear device down a 1000-foot shaft, a scheme calculated to crack the asteroid into two halves, saving Earth. NASA begins a crash program to train beer-besotted oil roughnecks for the mission. During a stopover to refuel at the Mir Station, the space station is accidentally destroyed, so a Russian cosmonaut also joins the team. Produced by Bay, Jerry Bruckheimer (Con Air), and Gale Anne Hurd (The Relic, The Abyss). ~ Bhob Stewart, Rovi

Michael Kaplan
as NASA Tech No. 5

Christopher Worret
as Operator No. 1

Adam Smith
as Operator No. 2

Deborah Nishimura
as Client No. 1

Albert Wong
as Client No. 2

Jim Ishida
as Client No. 3

Ellen Cleghorne
as Helga the Nurse

Mark Curry
as Stu the Cabbie

Duke Valenti
as Roughneck No. 1

Michael "Bear" Taliferro
as Roughneck No. 2

Billy Devlin
as Roughneck No. 3

Kathleen Matthews
as Newscaster No. 2

J.C. Hayward
as Newscaster No. 3

Andrew Glassman
as Newscaster No. 4

Dwight Hicks
as FBI Agent No. 1

Odile Broulard
as Geo Tech No. 1

Kathy Neff
as Reporter No. 1

Joseph Patrick Kelly
as Marine No. 1

Peter White
as Secretary of Defense

Charlton Heston
as Narrator, the Narrator
View All

Just because you're big does not mean you're not brainy, and this smart, polished entertainment crushes the notion that fx/disaster films run only on low-octane dialogue, lowest-common-denominator narrative and the lowliest instincts of tie-in marketeers.

Armageddon is big and noisy and stupid and shameless and it's going to be huge at the box office.

How does Armageddon, a movie obsessed with countdowns and countdown clocks, manage to redefine -- downward -- the standard for summer stupidity? Let me count the ways.

It's strictly a side issue whether mankind will survive colliding with an asteroid the size of Texas; the real question is whether Liv Tyler, who plays Bruce Willis's daughter, gets to keep her boyfriend.

The special effects are the best that $150 million can buy and the script plays like a near-afterthought.

The end of the world is going to be very noisy and filled with some of the worst dialogue ever.

There are great disasters flicks but Armageddon is not one of them.

Virtually nothing happens, and it happens at the most unrelenting speed.

The special effects are spectacular, even if the acting and script are patchy, but at two and half hours long, it overstays its welcome.

By the time Bay and Bruckheimer appropriate John F. Kennedy's image in their final small-town-America montage, it's clear their pomposity knows no limits.

Michael Bay's mindless, brain numbing action extravaganza does it's job by entertaining but is a guilty pleasure at best.

Too melodramatic and out of place. Michael Bay's apocalyptic picture only provides somewhat-fascinating visual with a stale plot and uninspiring cast. This film is negative in so many ways, that's enjoyable and entertaining just to joke at. 3/5

HOW this got a bad rating from Rotten Tomatoes i will never know, as you would never expect Bruce Willis to sacrifice himself. This is as pure as an action drama film gets.