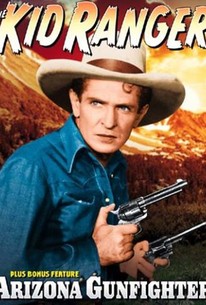 To those well versed in the Bob Steelewesterns of the 1930s, it's hardly surprising to reveal that the plot of Arizona Gunfighter was motivated by the murder of the hero's father. One of the more novel plot twists finds good-guy gunfighter Colt Ferron (Steele) casting his lot with reformed outlaw Wolf Whitson (Ted Adams). The fight scenes are impressive, the straight-acting scenes less so: though he was capable of delivering a good performance, Steele often as not ran the emotional gamut from A to B. Arizona Gunfighter was one of several Steele westerns produced by A.W. Hackel for Republic release. Most of these were directed by Robert N. Bradbury, who happened to be the star's father.

There are no critic reviews yet for Arizona Gunfighter. Keep checking Rotten Tomatoes for updates!

There are no featured reviews for Arizona Gunfighter at this time.