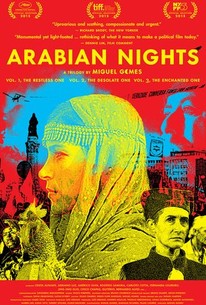 In Portugal - one European country in crisis - a film director proposes to build fictional stories from the miserable reality he is immersed in. However, failing to find meaning in his work, he cowardly runs away and leaves the beautiful Scheherazade to stand in his shoes. She will require enthusiasm and courage so as not to bore the King with sad stories of this country! As nights go past, restlessness leads to desolation and in turn to enchantment. Therefore Scheherazade organises the stories she tells the King in three volumes. She begins like this: "It hath reached me, O auspicious King, that in a sad country among all countries...". Volume 2, The Desolate One In which Scheherazade tells of how desolation invaded men: "It hath reached me, O auspicious King, that a distressed Judge will cry instead of giving out her sentence on a night when all three moons are aligned. A runaway murderer will wander through the land for over forty days and will teletransport himself to escape the Guard while dreaming of prostitutes and partridges. A wounded cow will reminisce about a thousand-year-old olive tree while saying what she must say, which will sound none less than sad! The residents of a tower block in the suburbs will save parrots and piss inside lifts while surrounded by dead people and ghosts; including in fact a dog that...". And seeing the morning break, Scheherazade fell silent. - "Damned tales! If things continue this way my daughter will surely end up with her throat slit!" - the Grand-Vizier, Scheherazade's father, thinks in his palace in Bagdad.

Chico Chapas
as Simao 'Without Bowels'

Jing Jing Guo
as Speaker For The Twelve Chinese Ladies

A glowing lovesong to Portugal performed by a man who has mastered a range of exotic instruments.

Some of the stories are genuinely affecting. But Gomes' arcane storytelling style and frequent use of absurdity will require a good deal of patience from filmgoers.

The melancholy that falls over this chapter is hard to shake but its tempered slightly by the love Gomes has for his characters, bad habits, ingrained sadness and all.

The stories have an almost dreamlike sweep and imaginative energy, and the film never exhausts that exuberance.

Bracing, angry, hilarious, moving, and above all, highly original.

A weird but strangely wonderful film.

The cinematic language in which Gomes is working is immersive rather than strictly narrative. And as such, the occasional lapse of concentration hardly matters.

Once again, the imagery is sublime, while Gomes provides much to ponder, unsettle and amuse.

The second part in the Arabian Nights saga slowly but surely raises a middle finger to the Portuguese establishment.

Funny, exhausting, polemical and poetic, it is a joyous assertion of Gomes' belief that storytelling serves as an escape from reality, and a way to confront and transcend even the most difficult of times.

The flights of ribaldry and tragicomic japes in this serrated knees-up make for a headlong rush into giddy and perverse delirium.

It is a curious thing to notice how this second chapter of Miguel Gomes' Arabian Nights trilogy is a lot more conventional than the first in terms of structure, but even so it is a wonderful film that achieves a level of sublime perfection in its chronicle about the tears of the judge.