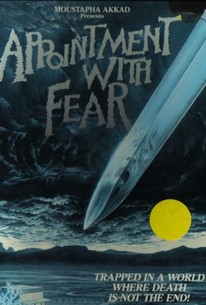 Director Ramzi Thomas had his name removed from this silly horror film from Halloween producer Moustapha Akkad, adopting the common no-fault pseudonym "Alan Smithee." One can hardly blame him. The plot has comatose Garrick Dowhen possessed by Attis, an Egyptian tree god, and stalking his babysitter and other teenagers by use of astral projection. Much the same plot had been used in 1974's Psychic Killer with somewhat better results. Michele Little is the damsel in distress and cartoon fans will recognize Dayton Allen (the voice of Deputy Dawg) in a small role.

Garrick Dowhen
as The man

Sergia Simone
as The Woman

Steven B. Gregory
as Young Man

Bruce Meade
as Police
View All

There are no critic reviews yet for Appointment with Fear (Deadly Presence). Keep checking Rotten Tomatoes for updates!

There are no featured reviews for Appointment with Fear (Deadly Presence) at this time.