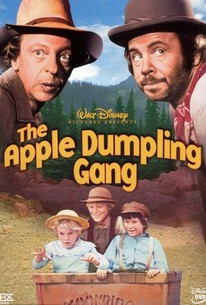 The Apple Dumpling Gang stars Bill Bixby as Russell Donovan, a slick frontier gambler. In Runyon-esque fashion, he is compelled to look after three precocious oprhaned kids. He can't handle the responsibilities alone, so he agrees to an in-name-only marriage to hoydenish stagecoach driver, Magnolia Dusty Clydesdale (Susan Clark). Fortuitously, they discover that a mine belonging to the kids' late father is worth millions. This brings several disreputable characters into the storyline: bumbling "nice" bandits Theodore Ogelvie and Amos (Don Knotts and Tim Conway), and deadly "bad" bandits headed by Frank Stillwell (Slim Pickens). Based on a novel by Jack M. Bickham, The Apple Dumpling Gang was successful enough to spawn a sequel-not to mention several future screen teamings for Don Knotts and Tim Conway.

James E. Brodhead
as The Mouthpiece

Richard Lee-Sung
as Oh So

James Brodhead
as The Mouthpiece

The traditional ingredients of homely moralising, sentimentality and raucous slapstick are used sparingly, the dialogue is fairly bright, some visual gags are neatly executed.

Everytime I see one of these antiseptic Disney films, I'm reminded of the thrills and genuine artistry that went into the studio's films during its golden age in the 1940s and 1950s.

A delightful cast of character actors helps the childish story, with Conway and Knotts beginning what would become a somewhat famous, but very simple-minded, film comedy duo.

Few people remember anything about this movie apart from the hilarity generated by this scene-stealing duo.

One of the best Disney movies of the decade. It's more of a family movie than just a kids movie. I especially loved Bixby in this movie, he's cute. This movie is fun, humourous, and exciting too, kids and adults will enjoy it.