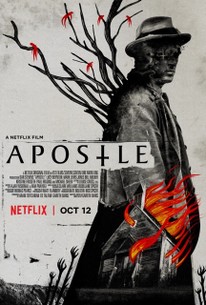 London, 1905. Prodigal son Thomas Richardson (Dan Stevens) has returned home, only to learn that his sister is being held for ransom by a religious cult. Determined to get her back at any cost, Thomas travels to the idyllic island where the cult lives under the leadership of the charismatic Prophet Malcolm (Michael Sheen). As Thomas infiltrates the island's community, he learns that the corruption of mainland society that they claim to reject has infested the cult's ranks nonetheless - and uncovers a secret far more evil than he could have imagined. Written and directed by Gareth Evans (THE RAID), APOSTLE is a harrowing occult fable where the only thing more horrifying than madness is the sinister reality behind it.

Apostle gets too bound up in the island cult it's meant to be escaping.

Apostle is ultimately an absorbing, horrifying movie that's maybe not as smart as it wants to be. But it is a lot stranger, and more disturbing, than you might expect.

I'm not sure 'Apostle' quite justifies its 130-minute running time, but you have to say this about it: It's like nothing else you could include in your annual Halloween horror marathon this year.

That rarest of treats: a horror movie that starts out as one thing, and finishes having mutated into another.

This is a timely tussle with a nation's collective sense of shame.

A Gothic horror mystery that's less like an adrenaline shot to the heart than a rusty, hand-cranked drill to the skull.

A mixture of 'hell is other people' and 'there's something nasty in the woodshed' vibe, I was surprised and honestly, scared.

The film, starring a Dan Stevens that emanates charisma, is not afraid of taking risks when combining genres in constant evolution. [Full Review in Spanish]

Just barely delivers on its creepy folklore with its various twists and turns failing to fulfill its potential.

The terror's good enough. Underneath is a compelling story that eviscerates organised religion in all its forms as a destructive, malicious, and repressive force.

Apostle is a deeply satisfying trek into the unknown. There is gore, there is violence, there is mystery, and yes - even some goats.

Apostle perfectly illustrates how destructive the patriarchy is; how power is corruptive; how religion can so easily be twisted into ugliness; how men react with violence ...

I think far too many movies that go for a similar vibe to Apostle aren't willing to take that very important step into actually embracing your supernatural/fantasy/gothic elements. Apostle on the other hand, goes full hog saying "fuck that", and in turn I'm saying "Please sir, may I have some more."

Could have been great if some the ideas and characters were fleshed out a little more but Evans can still stage an violent set piece like no one else, and this is a mostly a wild ride when it sticks to the basics of its genre.

Gorgeous looking and gloomy Netflix horror movie in the vein of classics like "The Wicker man" or recent sleeper hit "Black Death". The atmosphere, the actors, the look, all that works. Unfortunately, the plot is oddly confusing at times, as are some characters easy to mix up and unknown motivations. That still works for some gruesome, sometimes even exciting entertainment, but unfortunately fails to deliver a long lasting punch.