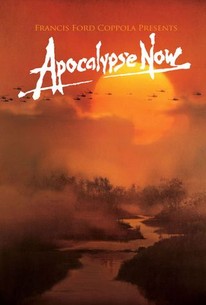 One of a cluster of late-1970s films about the Vietnam War, Francis Ford Coppola's Apocalypse Now adapts the Joseph Conrad novella Heart of Darkness to depict the war as a descent into primal madness. Capt. Willard (Martin Sheen), already on the edge, is assigned to find and deal with AWOL Col. Kurtz (Marlon Brando), rumored to have set himself up in the Cambodian jungle as a local, lethal godhead. Along the way Willard encounters napalm and Wagner fan Col. Kilgore (Robert Duvall), draftees who prefer to surf and do drugs, a USO Playboy Bunny show turned into a riot by the raucous soldiers, and a jumpy photographer (Dennis Hopper) telling wild, reverent tales about Kurtz. By the time Willard sees the heads mounted on stakes near Kurtz's compound, he knows Kurtz has gone over the deep end, but it is uncertain whether Willard himself now agrees with Kurtz's insane dictum to "Drop the Bomb. Exterminate them all." Coppola himself was not certain either, and he tried several different endings between the film's early rough-cut screenings for the press, the Palme d'Or-winning "work-in-progress" shown at Cannes, and the final 35 mm U.S. release (also the ending on the video cassette). The chaotic production also experienced shut-downs when a typhoon destroyed the set and star Sheen suffered a heart attack; the budget ballooned and Coppola covered the overages himself. These production headaches, which Coppola characterized as being like the Vietnam War itself, have been superbly captured in the documentary, Hearts of Darkness: A Filmmaker's Apocalypse. Despite the studio's fears and mixed reviews of the film's ending, Apocalypse Now became a substantial hit and was nominated for eight Academy Awards, including Best Picture, Best Director, Best Supporting Actor for Duvall's psychotic Kilgore, and Best Screenplay. It won Oscars for sound and for Vittorio Storaro's cinematography. This hallucinatory, Wagnerian project has produced admirers and detractors of equal ardor; it resembles no other film ever made, and its nightmarish aura and polarized reception aptly reflect the tensions and confusions of the Vietnam era. ~ Lucia Bozzola, Rovi

Cynthia Wood
as Playmate of the Year

Cyndi Wood
as Playmate of the Year

George Canters
as Soldier with Suitcase

Jack Thibeau
as Soldier in Trench

George Cantero
as Soldier with Suitcase

Eleanor Coppola
as Photographer
View All

Apocalypse has the expressive extravagance of a Wagner opera-and not merely because the swooping helicopter scene is set to the "Ride of the Valkyries."

It has coherence, truthfulness, and conviction-up to a point.

Certainly, no movie in history has ever presented stronger proof that war is living hell.

Apocalypse Now is not merely the greatest film to come out of the Vietnam experience but one of the great works about the madness of our times.

The best of it is grand, mysterious and oddly possessed.

It was made through a combination of fear and determination, ending with an experience that is frightening, thought provoking, and brilliant.

The eerie journey upriver taken by a tormented officer (Martin Sheen) to kill his rogue superior (Marlon Brando) remains as trippily compelling as many will recall.

One of the pleasures of Apocalypse Now is that Coppola never settles for a single explanation.

This monumental apocalypse of napalm and helicopters ends up being a total spectacle of war, rarely achieved in film. [Full Review in Spanish]

Although Apocalypse Now is not a great movie, it shows a still-impressive, politically inspired ambition -- a reminder of why film culture matters... Mixing pessimism with astonishment, it expanded cultural unease on a grand 70mm scale.

The film holds together well enough until it reaches its final muddle, and it has scenes and moments unequaled in recent European or American movies.

Enjoyed the first two thirds of the movie more than the final third, but it was still very well done and well acted. Fat Brando is always nice, too.

Coppola's all-time classic is an intense Vietnam War nightmare that sets out to portray with some of the most spectacular visuals the unfathomable horror and madness of war, following a man as he goes further and further in a harrowing descent into the very heart of darkness.

The way the film is shot is as searing as the Vietnamese heat; few films can compare to the intensity and quality of picturesque way it is shot accompanied with its great writing, and legendary direction.

A black ops assassin is sent into the jungles of South East Asia to hunt down and kill a one-time career military golden boy who has turned renegade and began operating outside of the chain of command. Francis Ford Coppola's dream-like journey through the horrors and absurdities of the Vietnam war, like 2001: A Space Odyssey before it, is more an experience than a story with any kind of strict middle, beginning and end. It's not the destination that's important. It's chock full of memorable performances from Martin Sheen's Willard who becomes fascinated with his target and shares more in common with him than he'd like to admit, through to Brando's towering presence as the rarely seen, shadow enshrouded god of war who has tired of the hypocritical "rules of engagement". Not forgetting Kilgore, who despite the long and illustrious career of Robert Duvall, will always be the character he is remembered for and the Ride Of The Valkyries sequence is one of the all-time greats of cinema. It has so many haunting, nightmarish images and the whole film is absolutely stunning to look at from beginning to end. Some may be left bemused by the rather free-form approach but it is certainly the most creative and provocative war film ever made.