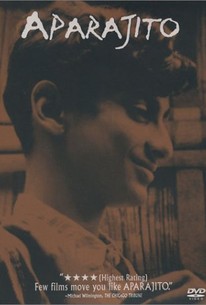 The Unvanquished is the second of Indian director Satyajit Ray's "Apu Trilogy" (the first was Pather Panchali). Ray's young protagonist Apu is permitted a formal education over the gentle objections of his mother, who'd wanted him to be priest. Eventually, Apu earns a university scholarship and arrives in the teeming metropolis of Calcutta. Overwhelmed by life in the Big City, the impressionable country boy forgets about his loving mother. By the time Apu returns to his home, he finds it's too late to pick up pieces. Smaran Ghosal plays the adult Apu, with Pinaki Sen Gupta portraying his younger counterpart in the flashback. Aparajito was derived from a novel by Bibhutibhusan. The film also features a musical score by Ravi Shankar. ~ Hal Erickson, Rovi

Smaran Ghosal
as Apu as an adolescent

Pinaki San Gupta
as Apu as a boy

Ray's relaxed, open style had a tremendous influence on the film world of 1956, but time has absorbed some of its originality.

It doesn't have quite the tension or quite the variety of mood but it has a special brooding quality and a more explicit conflict between East and West.

It is done with such rare feeling and skill at pictorial imagery, and with such sympathetic understanding of Indian character on the part of Mr. Ray, that it develops a sort of hypnotism for the serene and tolerant viewer.

Standing above fashion, it creates a world so convincing that it becomes, for a time, another life we might have lived.

There's pleasure in witnessing Apu's thrill of knowledge, but sadness when his ambitions create an inevitable break with his mother.

Aparajito (aka The Unvanquished) is both grander in scale (it moves back and forth from seaside tenements to country estates to a university in Calcutta) and more inwardly focused, a quiet meditation on maturity, modernization, and loss.

... Ray introduces us to the bustle of city life (where poverty is just as prevalent but has a different face).

...Aparajito...drew criticism for its refusal to create an idealized mother-son relationship.

Humanist film-making at its best.

The second panel in Ray's masterpiece, Thr Apu Trilogy, is less dramatic than the first or last, but it's just as insightful and emotionally touching.

not to take anything away from it but i liked the first part better. definitely being drawn into the life of this family