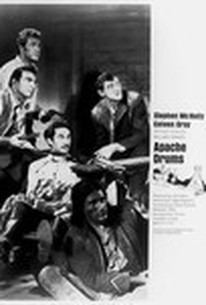 Shortly before his death, horror film producer Val Lewton switched creative gears by overseeing the Universal western Apache Drums. The scene is the potentially prosperous western town of Spanish Boot, built from nothing by a group of determined settlers. Before they can enjoy the fruits of their labors, the townsfolk are threatened with an imminent Apache attack. Delivering this sobering news is gambler Sam Leeds (Stephen McNally), previously kicked out of town by the "proper" citizens. At first, no one believes Leeds, but soon the Apaches prove the veracity of the gambler's claims. The rest of the film is light on action but heavy on tension, as the true personalities of all concerned are revealed while they await the final, fatal Apache assault.

There are no featured reviews for Apache Drums at this time.