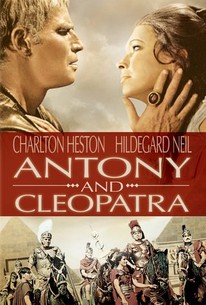 Charleton Heston directed, wrote, and starred in this adaptation of Shakespeare's Antony and Cleopatra, a historical drama that attempts to bring an epic visual style to the Bard's original stage play. The story concerns Marc Antony's attempts to rule Rome while maintaining a relationship with the queen of Egypt (Hildegarde Neil), which began while Antony was still married. Now he is being forced to marry the sister of his Roman co-leader, and soon the conflict leads to war. ~ Perry Seibert, Rovi

Critic Reviews for Antony And Cleopatra

There are no critic reviews yet for Antony And Cleopatra. Keep checking Rotten Tomatoes for updates!

Audience Reviews for Antony And Cleopatra

This is only for Shakespeare-O-philes. Yes, this is based on the play, just like the Marlon Brando version of Julius Caesar (1953). Charlton Heston wrote the screenplay and was the director.