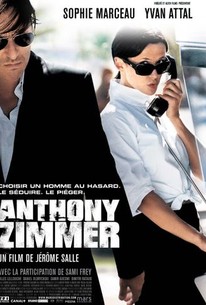 In Paris, the international police force and the Russian mafia are chasing Anthony Zimmer, an intelligent man responsible for laundry of dirty money in France. Zimmer had extensive plastic surgery, and his new face and voice are completely unknown. The only means to reach Zimmer is through his beloved mistress Chiara, who is under surveillance of the police and the mobsters. While traveling by train to the country nearby Nice, the common man François Taillandier, who has the same body shape of Zimmer, is select by Chiara as if he were Zimmer and used as a bait to lure those that are pursuing her. When Taillandier is chased by the professional Russian killers, he runs the French police when the real situation begins to be disclosed to him.

A bad movie that brings up the bad moment of the current thrillers. [Full Review in Spanish]

This is writer/director Jerome Salle's thrilling debut feature, and earned a nomination as Best First Feature at the 2006 Cesar Awards

If there would be anything to complain about (apart from the rather silly ending), it would be that first-timer Salle makes the film fly by almost too fast.

Effective low-key thriller enhanced by short bursts of tensely gripping action. Greatly superior to the limp American remake " The Tourist ", make sure you see this one first to avoid the same anger I relived because the major surprise had already been spoiled. Even worse, that movie only survived by cheating with its characters' behavior, while "Anthony Zimmer" makes more logical sense while planting some shrewd clues. Admittedly that one features a ravishing Angelina Jolie, but an enticingly enigmatic Sophie Marceau doesn't get seated at the table by the kitchen door either.

"That man over there... I think I saw him on the train. And? Maybe he's following us. I think you're right. You do? You should be a mystery writer." A very stylish, elegant thriller. Great cast with Yvan Attal and the very beautiful and seductive Sophie Marceau. Great score by Frederic Talgorn.