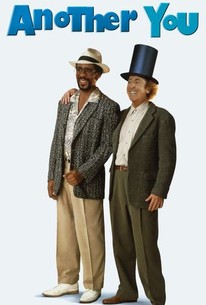 When con man Eddie Dash (Richard Pryor) is released from prison he's told to fulfill the required 100 hours of community service as the bodyguard/escort of a recently released mental patient (Gene Wilder). It's not too long before Wilder figures out a way to make a little dough at the expense of his impaired charge. Together they manage to get involved in an inheritance scam that's loaded with troubles and trials for all. It's apparent to most viewers that the Richard Pryor appearing in this film is a far cry from the actor most have seen previously; this is the first film undertaken by Pryor following a very serious illness.

Michael J. Pollard
as The Patient
View All

News & Interviews for Another You

Toronto Wrapup: Senh, Jen And Tim’s Raves And Rants From The Festival
Richard Pryor Passes Away at 65

View All Another You News

Critic Reviews for Another You

The final and worst of the four Gene Wilder-Richard Pryor movies.

Pathetic attempt to recapture the vanished magic of a once-effective comedy team.

Gene Wilder and Richard Pryor have been a brilliant team in the past. Such is so plainly not the case in this awful little misfire.

Audience Reviews for Another You