Another Day in Paradise2008 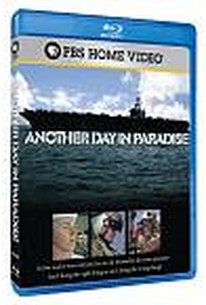 Another Day in Paradise Photos

Created from footage captured during the filming of the PBS series Carrier, Another Day in Paradise explores the struggle waged by three men in various stages of fatherhood to serve their country while living and working in the harsh environment of an aircraft carrier, and constantly thinking of the loved ones they left behind. Doug Booher, Randy Brock, and Chris Altice are three of 5,000 sailors living onboard the USS Nimitz. Summoned from their families for a six-month deployment to the Persian Gulf, these men may perform disparate tasks yet they all have one thing in common -- they're all either parents, or expecting a child. By delving deep into the personal lives of all three, the filmmakers raise numerous questions about their work onboard the Nimitz, and the role of the Navy in times of war. A fighter pilot in the famed "Black Aces" squadron, Lt. Booher is attempting to balance his life and military career, no simple task for a man with a newborn back home. Meanwhile, tough-talking Gunnery Sergeant Brock repairs planes for the Marine squadron "The Red Devils" while pondering what kind of father he will be to the son who is born during his deployment. Abandoned at age three by his own parents, a pair of carnival workers, Sergeant Brock doesn't want to be an absent father. And while 21-year-old ordnance man Altice would rather be partying in a frat house than arming military jets for war, his responsibilities back home are about to take a giant leap; just before he left for the Persian Gulf, his new girlfriend revealed that she was pregnant.

Critic Reviews for Another Day in Paradise

There are no critic reviews yet for Another Day in Paradise. Keep checking Rotten Tomatoes for updates!

There are no featured reviews for Another Day in Paradise at this time.

Another Day in Paradise Quotes