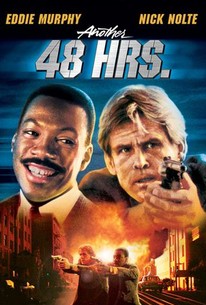 Critics Consensus: Even the return of Eddie Murphy, Nick Nolte, and director Walter Hill can't hide the lazy, patchwork quality of Another 48 Hrs.

Critics Consensus: Even the return of Eddie Murphy, Nick Nolte, and director Walter Hill can't hide the lazy, patchwork quality of Another 48 Hrs.

Critic Consensus: Even the return of Eddie Murphy, Nick Nolte, and director Walter Hill can't hide the lazy, patchwork quality of Another 48 Hrs.

At times, Another 48 Hrs. seems less like a sequel to than a parody of the first 48 Hrs., especially when Nick Nolte, repeating his role from the earlier film, begins commenting on the cliched absurdity of the goings on. This time, Nolte risks life, limb and career as he obsessively tries to bring an elusive master criminal known as "The Iceman" to justice. Eddie Murphy, who stole the show in the first 48 Hrs. as the wheeler-dealer convict who becomes Nolte's reluctant partner, is brought into the plotline of the second film when a contract is taken out on his life. The adversarial relationship between Nolte and Murphy, supposedly dissipated by the end of the first film, is revivified in the sequel via a couple of plot devices. Still, Murphy rallies to the occasion, in the process saving Nolte from being thrown off the force. Though not as successful as the first film, Another 48 Hrs. proved that there were still enough Eddie Murphy fans around in 1990 to insure a strong box-office showing. ~ Hal Erickson, Rovi

Felice Orlandi
as The Warden

John Bluto
as Review Board Chairman

Critic Reviews for Another 48 Hrs.

After a few films unworthy of his talent, Eddie Murphy returns to form with what he plays best: the fast-talking survivor in a hostile world. Nick Nolte also shines in a role tailored to his shambling frame.

It's a minor pleasure to see Murphy slightly subdued. What seems more problematic is the virtual exaltation of Dirty Harry vigilantism, the storm trooper mentality and behavior on Nolte's part that the film breezily takes for granted ...

Walter Hill, who also directed the first film, surely recognizes the hollowness of what he's doing here. He also hasn't had a hit since "48 HRS.," which no doubt explains why he's once again tilling these charred fields.

The key words here are lazy and contrived.

Mr. Murphy has two comic moments, which aren't enough for a feature-length film. Among other things, he has developed some of the same maddening mannerisms that marked Frank Sinatra's performances in his Rat Pack movies.

Hill and his stars are merely going through the motions, but the motions are immensely familiar.

Although original stars Eddie Murphy and Nick Nolte are reunited with director Walter Hill, all three seem to be going through the motions here.

The idea of dropping in on Reggie Hammond and Jack Cates five years later presents some amusing and intriguing possibilities. But little thought or imagination have been devoted to considering how the two characters might have changed over the years.

Not a career high for anyone involved, rarely has 90-odd minutes felt more like 48 hours.

From start to finish, the picture is barely alive, staggering through a cardboard obstacle course while waving around a few guns and breasts to keep the audience awake.

Tough, taut direction by action auteur Walter Hill makes this a much better sequel than its reputation.

Who the hell cares? Take back the first 48.

Audience Reviews for Another 48 Hrs.

Really, it's the same caliber as the first, I actually think this one flows better and has more interesting bad guys. Sure, it's basically a very standard sequel but it's just a lot of fun and has characters that are so interesting. It's a really solid buddy cop movie, anyone who loves the genre will definitely like this.

It's faster, funnier and more action-packed than the first. An endlessly enjoyable sequel. Better than the first. Nick Nolte and Eddie Murphy are still a great team. Hard-hitting, fast, furious and relentlessly funny. What a great and fun ride. An explosive and suspenseful action-packed comedy loaded with great stunts and body-slamming laughs. The boys are back in town and this time their packing more heat.

Not a good tag team.