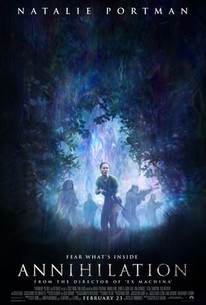 Critics Consensus: Annihilation backs up its sci-fi visual wonders and visceral genre thrills with an impressively ambitious -- and surprisingly strange -- exploration of challenging themes that should leave audiences pondering long after the end credits roll.

Critics Consensus: Annihilation backs up its sci-fi visual wonders and visceral genre thrills with an impressively ambitious -- and surprisingly strange -- exploration of challenging themes that should leave audiences pondering long after the end credits roll.

Critic Consensus: Annihilation backs up its sci-fi visual wonders and visceral genre thrills with an impressively ambitious -- and surprisingly strange -- exploration of challenging themes that should leave audiences pondering long after the end credits roll.

It's certain that the astonishing special effects would have worked better on a larger cinema screen, and it's a shame to lose their impact. But the dialogue is clunky and the plot disjointed.

It's audacious stuff, topped by a lovely twist ending, and deserving of more than a casual skim through on an iPad.

Portman's high-tension acting, her inability to relax, suits the material down to the ground. It's one of her best performances ...

Top-notch sci-fi and a chilling allegory for humanity's capacity for self-destruction.

Garland's version is a worthy mutation.

Making movies steeped in vagueness these days is proving to be an excellent way to earn critical praise, but being artfully ambiguous strikes me as a way to cover for not being able to finish the job.

Annihilation shares the ambiguous dream logic found in David Lynch's best work, but mixes it with the type of horrific imagery seen in Alien and The Thing.

A seriously intelligent, and visually stunning, picture that benefits from its bold structure and dedicated female cast.

Annihilation is a smart and intelligent movie. It's super ambitious and maybe a bit tedious. The movie requires patience and at times gets a bit too showy.

Even as it relies on horror tropes for shape Annihilation's mission is to plumb the depths of Lovecraftian existential fear.

Annihilation is a shining example of what scifi can be when the narrative hinges on one woman and the world-altering decision she must make: Do I save my world, or not?

Annihilation is a puff from one of the year's most cataclysmically up-tempo strains of synthetic sci-fi devastation.

Annihilation's underlying themes, innovative sci-fi scheme and strong performances from Portman and cast leave audiences befuddled yet mesmerized at the complexities and even the ambiguity of its conclusion. 3.9/5

Alex Garland follows his excellent Ex Machina with another thought-provoking science-fiction film, this time to tackle issues like depression and self-destruction. Full review on filmotrope. com

The aliens have invaded, only in this take they've only grabbed one small portion of land. The authorities send in small teams to investigate ("why not a larger force," I asked, to no response), only none return. We follow the latest team's trip inside enemy held land. I was hooked with the premise, curious why a team would be sent that was all female - there's a point, right? (answer: there's no point). What emerges from the dark of the dense foliage can be seen as alien-sided rationalization for the classic "invasion of the body snatchers' that's interesting, but unfortunately doesn't engage.

Beginning his career as an author and responsible for the source material of Danny Boyle's The Beach in 2000, Alex Garland then directly ventured into the film industry by doing screenplay's - again with Boyle on 28 Days Later and Sunshine - before he eventually took the reigns himself by making his directorial debut with the magnificent science fiction film Ex Machina in 2014. On this evidence, it's fair to say that Garland has went from strength to strength and his sophomore film, Annihilation, continues that trend. One could even argue that it's his best work yet. Plot: Lena (Natalie Portman), a cellular biologist and former soldier, joins an expedition to uncover what happened to her husband Kane (Oscar Issac) who disappeared during a mission inside Area X - a swampland across the Florida coastline that was hit by a meteor and is now a sinister and mysterious phenomenon that blocks all contact with the outside world. During the expedition, Lena discovers a world of mutated landscapes and creatures that threatens everything we have come to know about science and evolution and threatens not only her life but also her sanity. Based on the first book in the "Southern Reach" trilogy by Jeff VanderMeer we are drip fed the events and conundrum of Annihilation in the three stages of the characters' exploration: Area X, The Shimmer and The Lighthouse. Such is Garland's restrained approach, we are kept very much at arms length about what exactly is going as each of these chapters make little sense. When the film does provide some answers, it only opens it up to even more questions and therein lies the craftsmanship and intrigue of this abstract sci-fi fantasy. What's most apparent, though, is Garland's masterful control of pace and mood and it's his attention to these elements that provide the film with genuinely nightmarish possibilities. Area X is a foreboding, inhospitable land where the laws of physics and nature have turned in on themselves as the environment mutates with new and fascinating results. There are plants that share human DNA and result in growths of eerie, man-like tree structures and animals that retain and replicate the screams of the victims they've killed. Everything refracts as our planet, as we know it, is in the process of evolving into something else entirely. It's this very concept that makes Garland's film a terrifying experience. While it's beautifully shot by cinematographer Rob Hardy and boasts some visually stunning scenes it also has atmosphere in abundance. I've seen genre horrors that have failed to capture half of this films palpable feeling of dread and Garland knows exactly how to handle it's unsettling moments while aided with a hugely effective score by Geoff Barrow and Ben Salisbury. Harbouring the weighty themes of grief, suicide and self-destruction, Garland borrows heavily from the paranoia of John Carpenter's The Thing and also channels cancer as its psychological device, while many have compared it to Andrei Tarkovsky's 1979 metaphysical film, Stalker. Having recently caught up with that, I can definitely see the resemblance. Tarkovsky's film has a more reflective, philosophical tone to it whereas Garland explores a more scientific nature but the two are certainly bedfellows. Like Stalker, Annihilation refuses to provide easy answers and some might even leave the film frustrated with its ambiguity. However, it's this very ambiguous approach that contributes to the film's allure and fascinating premise. Needless to say, those not willing to put in the effort to work through its many layers will be left sorely disappointed and needn't bother at all. In fact, the film's production studio, Paramount Pictures, voiced their concern on it being too intellectual and complicated for the masses and decided not to release it widely in cinemas in fear of losing money. Instead, a deal was struck with Netflix to internationally distribute it on their streaming service. It's such a shame that films as bold and inventive as this are never given the confidence and respect they deserve. Paramount have been fools in their handling and marketing of this and can only hope that the film's reception doesn't suffer as a result. A haunting and genuinely frightening, sci-fi mystery that's as elliptical and unnerving as Tarkovsky's Stalker and as trippy as Kubrick's 2001: A Space Odyssey - with a plethora of other science fiction influences thrown in for good measure. It's only March but already we have one of the potential best films of 2018. This is a truly bold and intriguing undertaking from Alex Garland and he's laid down the gauntlet for the forthcoming year. Mark Walker