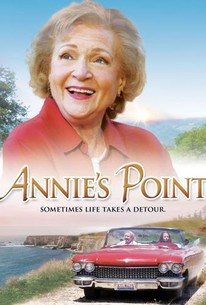 This heartwarming made-for-cable "road" picture begins in Chicago, where widowed grandmother Annie Eason (Betty White, convincingly portraying a 69-year-old while herself in her eighties!) wants to grant the final request of her husband Elliott: To release his ashes from the top of "Annie's Point"--3000 miles away. Embittered over having to manage his late father's business, Annie's son Richard (Richard Thomas) flatly refuses to take her to Annie's Point, so she goes instead with her free-spirited granddaughter Ella (Amy Davidson). Their odyssey turns into a frantic and sometimes funny chase after Annie goes on a gambling spree in Las Vegas, prompting Richard to hotly pursue his mother with the intention of having her institutionalized. Annie's Point made its Hallmark channel bow on January 22, 2005.

There are no critic reviews yet for Annie's Point. Keep checking Rotten Tomatoes for updates!

There are no featured reviews for Annie's Point at this time.