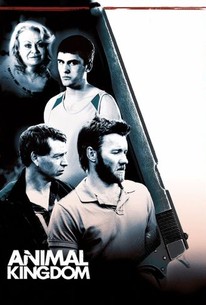 Critics Consensus: With confident pacing, a smart script, and a top-notch cast, Animal Kingdom represents the best the Australian film industry has to offer.

Critics Consensus: With confident pacing, a smart script, and a top-notch cast, Animal Kingdom represents the best the Australian film industry has to offer.

Critic Consensus: With confident pacing, a smart script, and a top-notch cast, Animal Kingdom represents the best the Australian film industry has to offer.

Welcome to the Melbourne underworld. It's the Wild West, played out on the city's streets. Armed robber Pope Cody is on the run from a gang of renegade detectives who want him dead. His business partner and best friend, Barry "Baz" Brown. wants out of the game. Pope's younger brotherCraig Cody is making a fortune in the illicit substances trade, whilst the youngest Cody brother, Darren, naively navigates his way through this criminal world -- the only world his family has ever known. And into this world arrives their nephew, Joshua "J" Cody, who comes to believe that he is a player in this world. But, as he soon discovers, this world is far larger and more menacing than he could ever imagine.

Susan Prior
as Alicia Henry

David Michôd
as Reporter
View All

Animal Kingdom is skilfully lit and edited and the performances are remarkable.

This is maybe the nearest we're going to get to an Australian GoodFellas.

Pungent scene by scene and bracing in its cumulative impact, Michôd's movie suggests what Aeschylus might have had in mind, if the House of Orestes had been fond of seafood barbeques.

A small part of us finds this family endearing - revolting but endearing.

Michôd's fatal flaw is creating a movie that rides on the tropes and successes of past crime movies in such a vainglorious manner, that he forgets that sympathetic, or even interesting characters make or break a film.

Animal Kingdom not only serves as yet another fine addition to a growing canon of Australian crime dramas, but also now proudly wears the bloodied crown of "King of the Jungle" in terms of tension, menace and impact.

A compelling, astounding and beautifully executed crime drama, supported by vigorous performances by the entire ensemble.

The film has the best two or three opening and closing minutes of anything nominated for an Oscar this year.

An intense, gritty depiction of a family whose life is dominated by crime and drugs, and how the youngest of the bunch (James Frecheville) is unfortunately faced with turning his uncles in after they commit a violent crime in retaliation to a corrupt police force. A cold-blooded Aussie thriller that features some powerful acting, especially Jacki Weaver as the matriarch of the bunch, and Ben Mendelsohn as one of the brothers who possesses a psychotic streak. It is a film that contains a lot of interesting twists and subtlety, as well as some pretty violent actions that successfully catch the viewer off guard. A simply riveting film that remains arresting throughout, with one of the more shocking endings I can recall.

One of the better opening monologues I've seen, eminently quotable and providing not only a snapshot of all the characters we'll meet, but also a voice for the film. Here's a taste: "Mom kept me away from her family because she was scared. I didn't know it at the time, but they were all scared, even if they didn't show it [...]. Even if they didn't know it, exactly. Even if they were having to do what crooks do all the time, which is block out the thing they must know - they must know it - which is that crooks always come undone, one way or another. [...] All this seemed strange to me, but not strange, either, you know what I mean? Kids just are wherever they are, and they just do whatever they're doing. This is where I was, and this is what I was doing." Josh's mom has just died of a drug overdose, and he tells us all this over the opening ten minutes, punctuated by a few telling conversations, as we see the family that he has no choice but to move in with, and the crimes he won't be able to help getting mixed up in. With the die cast, the stakes remain high, as this coming-of-age story has an angle like few others; as opposed to having to prove himself in the world of crime, Josh needs only to survive. Tense and well-acted, sincere but gritty, it's got several surprises and most importantly, comes across as a story that could be true. An unconventional crime flick that you must see.

An intriguing tension filled film, 'Animal Kingdom' is a strong debut feature from David Michod that draws you in with its darkly brooding characters. The film itself felt like a mix between 'Snowtown' and 'The Wire'. It was similar to 'Snowtown' with its central idea and setting but the constant feeling that no one is safe is reminiscent of 'The Wire'. The film is shot rather conventionally but is filled with imagery revolving around the title. Although the idea isn't original what is original is Animal Kingdom's spin on it, relating a criminal family to a pack of lions. Overall, although unoriginal 'Animal Kingdom' is a worthwhile watch with strong performances and an interesting spin on a much used subject.

An intense thriller about a teenage boy who gets pulled into a lair of dangerous lions - his own criminal family. With an intelligent script and a superb direction, this well-paced drama is absorbing and has great performances, especially Jacki Weaver as the matriarch of the Codies.