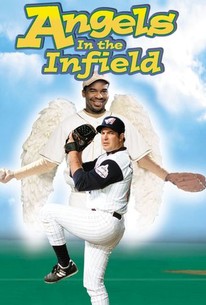 A baseball player stuck in a losing streak gets some heavenly help in the second sequel to Disney's 1994 hit Angels in the Outfield. Eddie Everett (Patrick Warburton) is a pitcher with the Anaheim Angels who has been in a slump ever since a bungled play helped his team lose the pennant a year ago. Depressed, Eddie has lost confidence in his abilities; his marriage to Claire (Rebecca Jenkins) is on the rocks, and when Claire decides to move on, she leaves it to Eddie to watch over their 13-year-old daughter Laurel (Brittney Irvin). Laurel loves her father, but they're all but strangers to each other, and she isn't sure what she can do to help him. One night, Laurel prays for help for her dad, and her prayer is answered in the form of a guardian angel, Bob "Bungler" Bugler (David Alan Grier). Bob was a singularly unimpressive ball player who died ten years earlier, and has been trying to earn his wings ever since; Bob hopes that by helping Laurel, he can prove his worth to St. Peter, and by helping Eddie, he might get one last change to play in the big leagues. Angels in the Infield also features Kurt Fuller as Simon, Eddie's agent, and Colin Fox as The Devil, who has plans of his own regarding Eddie's career.

Colin Fox
as The Devil

Critic Reviews for Angels in the Infield

There are no critic reviews yet for Angels in the Infield. Keep checking Rotten Tomatoes for updates!

Audience Reviews for Angels in the Infield

There are no featured audience reviews yet. Click the link below to see what others say about Angels in the Infield!

Angels in the Infield Quotes