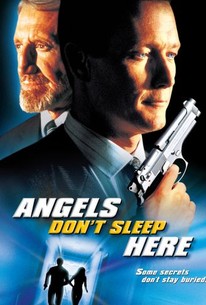 A man returns to his hometown determined to find out the truth about a 20-year-old crime in this drama. Harry Porter (Roy Scheider) is the mayor of a city that, while once quiet and peaceful, has since become a hotbed of vice and corruption. Russell Stark (Robert Patrick), one of the top men in the city's police department, has made it his job to keep any evidence of wrongdoing from sticking to Porter, but that may change with the return of Michael Daniels (Dana Ashbrook). Michael's twin brother Jessie disappeared under suspicious circumstances two decades ago, and his body was never found; Michael is now a trained forensic pathologist who has landed a job with the police department, and in his spare time he's been running tests on a number of "John Doe" bodies at the coroner's office, determined to find out what happened to Jessie. Angels Don't Sleep Here also features Kelly Rutherford and Kari Wuhrer.

Birgit Stein
as Maggie
View All

There are no critic reviews yet for Angels Don't Sleep Here. Keep checking Rotten Tomatoes for updates!

I am always up for checking out a movie I never heard before, and seeing Robert Patrick in the credits, who would not be a little curious to see the T-1000 in another movie? Boy was I disappointed ... ANGELS is garbage and a confusing mess for everyone. The 'star' actors looked like they could not care less and key characters were poorly introduced and wasted. You could put cardboard cut-outs on the set and you would not know the difference. If you survived the first twenty minutes without asking what the heck was going on, consider yourself gifted. ANGELS begins with two main stories, one of a mayor covering his past, and of a twin brother, returning home and continuing the search for his lost bro, went missing 20 some-odd years ago. The real stars are Ashbrook and Rutherford, who mindlessly plod their way through the script looking pretty while acting pretty stupid. Scheider and Patrick should be ashamed of themselves as both look blank faced and unimpressive in every shot. The script a disappointing, predictable mess, the direction and camerawork positively abominable (I never thought I would say that in a review) and the production a laugh, it is no surprise here why ANGELS took two to three years before hitting the video stores.