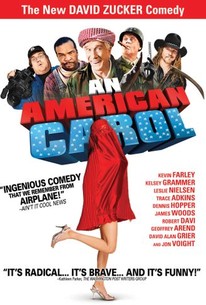 Critics Consensus: An American Carol suffers not so much from its perceived political bias, but from the fact that it simply is not very funny.

Critics Consensus: An American Carol suffers not so much from its perceived political bias, but from the fact that it simply is not very funny.

Critic Consensus: An American Carol suffers not so much from its perceived political bias, but from the fact that it simply is not very funny.

Trace Adkins
as The Grim Reaper

News & Interviews for An American Carol

View All An American Carol News

Critic Reviews for An American Carol

The mean spirit of Zucker's satire hardly jibes with the liberal spirits of the original tale.

Utterly asinine, sophomoric, tasteless, the movie has much in common with Zucker's Airplane!, The Naked Gun 2 1/2 and Scary Movie sequels, minus the laughs.

As entertainment, An American Carol ranks below YouTube clips of Sarah Palin.

Poorly made indie production has a script that feels like a list of ripostes collected over the last several years to liberal criticisms of the U.S.: The whole enterprise feels far more agenda- than entertainment-driven.

An American Carol is about as not-funny as a comedy can get.

It's a polemic, a screed, a combination comic rant and sentimental flag-waver that doesn't work as either.

It often takes mockery and even silliness to make one see the best and worst of a situation or themselves or just have to have some fun and it always seems to be funnier when done on film and by David Zucker.

American Carol is [Zucker's] first attempt to merge his newfound worldview with his work. Unfortunately, he swings at so many progressive targets, the punches he does land aren't backed by enough force.

You could strip every last marginally political idea from the movie, and it would still probably be one of the most grueling, unfunny things released that year.

It is hard to believe that a comedy this singularly inept and downright unfunny came from one of the minds behind one of the funniest comedies of all time, Airplane!.

Using sledgehammer gags in the service of a dissent-bashing tale, Zucker aims for the flag-waving brio of Warner Bros. cartoons during World War II, but he succeeds only in ruining Farley's big break.

Audience Reviews for An American Carol

I thought this was a really funny movie, why all the criticism?

Mildly funny. Not awful, but not that good either. As far as the message goes, it's as ridiculous as, well, one of Michael Moore's movies.

Laugh like your Country depends on it.
WARNING! This movie may be offensive to children, young people, old people, in-the-middle people, some people on the right, all people on the left, terrorists, pacifists, war-mongers, fish mongers, Christians, Jews, Muslims, atheists, agnostics (though you'd have to prove it to them), the ACLU, liberals, conservatives, neo-cons, ex-cons, future cons, Republicans, Democrats, Libertarian, people of color, people of no color, English speakers, English-as-a-second language speakers, non-speakers, men, women, more women, & Ivy League professors. Native Americans should be okay!