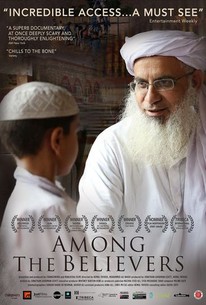 Among the Believers Photos

Firebrand cleric Abdul Aziz Ghazi, an ISIS supporter and Taliban ally, is waging jihad against the Pakistani government with the aim of imposing Shariah law. His primary weapon is his expanding network of Islamic seminaries for children as young as four. Among the Believers follows Aziz's personal quest, and charts the lives of two of his teenage students who are pawns in his ideological war.

News & Interviews for Among the Believers

Miss Peregrine’s Home for Peculiar Children Is Imaginative but Messy

View All Among the Believers News

Critic Reviews for Among the Believers

There's little that's not dispiriting about "Among the Believers" and its measured, direct entrée into a closed world of hopeless boys and girls memorizing the Koran, but forbidden from learning its meanings.

While it is maddening to see the aversion to open-minded education by Mr. Aziz ("'Progressive thought' is dying," he declares, pleased), we also see the stark poverty that leaves others with few choices but to follow him.

It insists on seeing its subjects' humanity - something rare in the Western press, particularly when reporting on Islam, and especially fundamentalism.

The filmmakers skillfully orchestrate the various levels of their exploration, from the intimate details of Talha and Zarina's lives to the workings of the big national picture.

An eye-opening exploration of secular/religious conflict in Pakistan.

Trivedi and Naqvi put together this multi-tentacled story using a daunting variety of footage, news reports and archival film mixed with interviews. It paints an extremely grim picture.

This isn't Friday night viewing, and there's certainly nothing groundbreaking here, but if you're interested in gaining insight into the rationale of Jihadism, this should certainly be a pitstop.

Naomi Soanes
One Room With A View

A chilling documentary that examines Maulana Aziz's Red Mosque network and the roots of Muslim extremism.

Aziz is shown to be at once strong, authentic, charismatic, vulnerable, boring, and a charlatan. He is not the kind of person you can easily demonize or humanize.

The film contains many chilling scenes of radicalized children, led by poverty and circumstance into a life of militancy. Many castoff children, are fed, indoctrinated, and turned into weapons in an unholy war

An unvarnished inside look at a society uprooted by religious warfare and the lives of the children caught in the crossfire.

Surprise-surprise. Young boys and girls become Islamic fundamentalists in order to get a meal and a roof over their head. The answer is not Predator drones but ending inequality.

Audience Reviews for Among the Believers

Using a seemingly detached approach that doesn't preach to the audience and understands that what it shows speaks for itself, this is an important documentary that offers a devastating look at religious fundamentalism brainwashing kids and turning them into terrorists.

Among the Believers Quotes