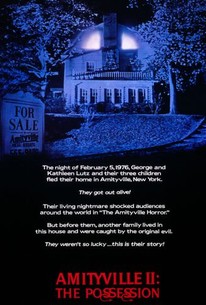 This prequel to The Amityville Horror portrays the "whys" and "wherefores" regarding the plightfully possessed Amityville house of terror as it describes a house full of unhappy people whose troubles breed troubles in a demon-generating atmosphere of creepy creations.

The sequel makes grotesque, heartless use of an authentic tragedy which predated the alleged haunting spree exploited in The Amityville Horror.

This movie is actually slightly better than The Amityville Horror, maybe because it rips off superior source material.

A story of possession wrapped up in family troubles, from abuse to incest, provides this sequel with a strong story- one of the most underrated horror sequels out there.

This is a genuinely bad movie, or at least an extremely dumb one, but it has such a dazzling flair for low-talent, no-taste showmanship that I can't help but find it charming.

by the film's final act, the special effects technicians have taken over almost completely, turning it from a parapsychological drama of some merit into a more conventional latex freakshow

An extremely sleazy first half eventually gives way to a second part that plays like a theater-company version of The Exorcist.

Should have torn down the house after the first movie.

A depressing imitation of The Exorcist.

an atrociously made film, uninteresting as a sequel/prequel and unsustainable on its own

Indefensibly inappopriate, and oh so much fun...

The rampant silliness of the movie's first half is certainly preferable to the utterly dull second half...

Decent follow-up to the Amityville Horror. For what it is, it's a fun little film that delivers mild chills and I think that the filmmakers should have only made one sequel. Although not perfect, this one is better than most and it is the final sequel that is actually worth seeing. The cast do a good job with the material at hand, and though not perfect, the film tends to rely on atmosphere to create tension, with enough entertainment value to thrill genre fans. Although not as good as the first, this one still is fun for what it is, and is a worthwhile sequel to the first film. I liked this one and I thought it was entertaining despite its flaws, and it is a film that genre fans should check out if they want to be mildly entertained In terms of a haunted house film, it could have been better, however it is far better than all the other sequels that came out after this one. Enjoyable as a guilty pleasure or if you have nothing else better to do, Amityville II is a pleasant time waster for what it is, just don't go expecting something great with this one either. The story is decent and it is interesting, and delivers haunted house fun despite its flaws. The film along with the first are good for what they are, just avoid every other sequel as the creative aspect would suffer significantly and each entry would become more ridiculous than the previous one. This is a fine second film that is underrated and is much better than what many critics have claimed it to be.

A dark, disturbing and creepy prequel to the Amityville Horror, which itself was pretty good, but this one I found to be better and quite underrated. It borrows heavily from The Exorcist, but if you found The Exorcist creepy and scary than this will likely be giving you a similar horrifying experience.

An extremely strange horror movie, and not always in a good way, I don't know, I suppose some people might like this movie if you like ones where things happen that don't normally happen in movies. It's not too bad, but it's kinda crazy and sort of combines elements of other popular horror movies too.

Amityville II: The Possession, which claims to be a prequel to the original Amityville Horror (1979), once again takes us to the infamous haunted Long Island house. The film opens with a shot of the house with a 'for sale' sign in the foreground as the camera pans around the outside while the credits play. Amityville II: The Possession then cuts to another shot of the house, this time the sign says 'sold'. An Italian American family have brought the house & are moving in, husband & wife Anthony (Burt Young) & Dolores Montelli (Rutanya Alda) with their four children, Sonny (Jack Magner), Patricia (Diane Franklin), Jan (Erika Katz) & Mark (Brent Katz). At first glance the large house seems perfect & is beautiful, but almost immediately things start to go wrong for the family. Dolores senses a presence in the basement which she claims touched her, when they sit down for their first meal that night & try to say a prayer the mirror on the wall suddenly falls off & begins to crack. Also that night the family are disturbed by banging on their front door & obscene images are mysteriously painted on walls. Sonny starts to hear strange demonic voices on his Walkman as well. The incidents don't stop & as a result the family starts to fall apart. However Dolores still senses an evil presence & contacts their local priest, Father Frank Adamsky (James Olson) & asks him to bless their house. Meanwhile Sonny is becoming more & more withdrawn as the evil presence in the house specifically singles him out & starts to possess him, the voices on his Walkman convince Sonny to seduce & have sex with his younger sister Patricia & eventually tries to get Sonny to kill his entire family. After witnessing some of these events & doing some research Father Adamsky starts to realise what's going on & is convinced that Sonny is being possessed by evil spirits, but is it too late to save Sonny & the Montelli family? Directed by Damiano Damiani I thought Amityville II: The Possession was actually a pretty good horror film & I don't usually like the haunted house sub-genre. The script by Tommy Lee Wallace based on the book 'Murder in Amityville' by Hans Holzer is well paced, entertaining, has decent characters & tries to tackle a few unexpected issues like incest, the break down of the family unit & wife/child abuse. Unfortunately some of these issues seem a little out of place & are treated in a slightly exploitative & lightweight way. But at the end of the day Amityville II: The Possession is basically a horror film at heart & exploitation is what we want so I'll forgive it. It uses all the haunted house clichés, doors opening & closing on their own, voices, eerie noises, ghostly wind that blows things all over the place, the kind elderly believing priest & spooky hallucinations but Amityville II: The Possession integrates them into the story as well as any other haunted house film. The first half of the film concentrates on these family elements while the second half is all about the possession & eventual exorcism which basically feels like The Exorcist (1973) condensed into 40 odd minutes complete with green vomit, but it moves along nicely & isn't boring. There is some brief nudity but the incest scenes aren't particularly graphic. There isn't much gore or violence, some expanding flesh, some shotgun wounds & a cool looking sequence where someone messily rips the skin off their face to reveal a monster. The acting is solid throughout by all involved but I did find Burt Young's character, the abusive Anthony very unlikeable. Technically Amityville II: The Possession is a strong film, music, photography, editing, special effects & production design are all above average, very polished & better than usual from a low budget horror. Overall I like Amityville II: The Possession a lot more than I thought I would, it's a good solid horror film that kept me entertained for 100 odd minutes & has a little more depth & style than usual without sacrificing the exploitation elements than us horror fans expect & love! Definitely worth watching.