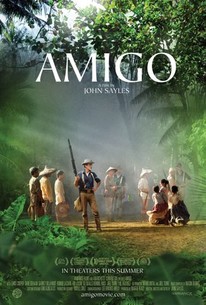 Amigo, from writer-director John Sayles, stars legendary Filipino actor Joel Torre as Rafael, a village mayor caught in the murderous crossfire of the Philippine-American War. When U.S. troops occupy his village, Rafael comes under pressure from a tough-as-nails officer (Chris Cooper) to help the Americans in their hunt for Filipino guerilla fighters. But Rafael's brother (Ronnie Lazaro) is the head of the local guerillas, and considers anyone who cooperates with the Americans to be a traitor. Rafael quickly finds himself forced to make the impossible, potentially deadly decisions faced by ordinary civilians in an occupied country. A powerful drama of friendship, betrayal, romance and heartbreaking violence, Amigo is a page torn from the untold history of the Philippines, and a mirror of today's unresolvable conflicts. -- (C) Official Site

Jemi Paretas
as Zuniga
View All

Critics Consensus: Conan the Barbarian is a Bloody Mess

A reflection on power and betrayal, on the thin line between acting as your conscience demands and protecting obligations close to your heart.

Sayles is always an interesting storyteller, and if "Amigo" isn't typical of his subtler methods, it's still a compelling look at history and its continuing influence.

"Amigo" might be the talkiest war movie ever made.

You could argue that the chief villain of the ambiguously titled "Amigo" is language, which is used quite deliberately to mock and mislead and betray.

By choosing Rafael as its hero, "Amigo" looks not only at a little-known part of American history, but at a rarely examined type of movie character.

An engrossing, perceptive, supremely humane drama about imperialism and loyalty.

Writer-director John Sayles isn't trying to tell the story of one war, or, more importantly, one man. He's using that one man to make a political point, thereby losing the humanity of his story in the process.

Naysayers might argue that the film's anti-war message is so obvious it doesn't bear repeating; but if that's the case, why do we tolerate so many unnecessary wars?

Movies this intelligent and aware of so many different points of view should be celebrated, so kudos to Sayles for pulling it off, time and again, in his multi-decade career.

"Amigo" is a small, interesting little low-budget film that benefits from beautiful photography and Sayles' well-paced direction. For its two hour running time, it breezes by and remains consistently entertaining. A few performances are off and the costume design is bland, but "Amigo" is another fine outing from one of cinema's greatest storytellers.

"Amigo" starts out on an ordinary day in the baryo of San Ysidro in the Philippines in 1900 before the silence is broken by the American army invading to restore order. Joaquin(James Obenza) escapes just ahead of the army's bullets to join the insurrectionaries led by his uncle Simon(Ronnie Lazaro), while leaving behind his father Rafael(Joel Torre) to lead the village. The Americans also release the prisoners held by the insurrectionaries, allowing them to go to Manila but Father Hidalgo(Yul Vazquez) agrees to stay as there are souls to save and people to annoy. Lieutenant Compton(Garret Dillahunt) is eager to move on also but Colonel Hardacre(Chris Cooper) orders him to stay behind so his soldiers can head off any rebellion. "Amigo" is John Sayles in fine form in that he not only captures the rhythms and details of another time and place, with a little known bit of history which I had studied back in college, but also in telling a timeless story that admittedly does have a hokey and drawn out ending. He also economically employs scraps of dialogue to fill in the backstory on the various characters. A lot of that goes to his talent for telling a story from as many different angles as possible which keeps the villains to a minimum and not sugarcoating the actions of the insurrectionists. If there is one, then I would like to volunteer the colonel, as his actions will have repercussions for decades to come. It's not just the writing that is to be applauded but also an excellent use of crosscutting between similar activities as performed by different groups and the best metaphor ever for cockfighting. Throughout, it is the Filipino people that have the most sympathy here, as underlined by Rafael when he points out that they are fucked from both sides.