The Americanization of Emily1964

The Americanization of Emily (1964) 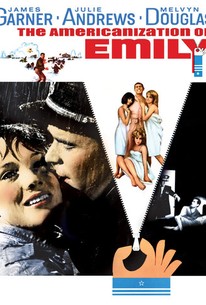 The Americanization of Emily Photos

The lively but somehow slightly distasteful The Americanization of Emily stars James Garner as a WWII naval officer who happens to be a craven coward. While his comrades sail off to their deaths, Garner makes himself scarce, generally hiding out in the London flat of his lothario navy buddy James Coburn. Garner falls in love with virtuous war widow Julie Andrews (the "Emily" of the title), but she can't abide his yellow streak. Meanwhile, crack-brained admiral Melvyn Douglas decides that he needs a hero--the first man to die on Omaha Beach during the D-Day Invasion. Coburn is at first elected for this sacrifice, but it is the quivering Garner who ends up hitting the beach. He survives to become a hero in spite of himself, winning Andrews in the process. Paddy Chayefsky's script, based on the novel by William Bradford Huie, attempts to extract humor out of the horrors of war by using broad, vulgar comedy instead of the light satirical touch that would seem to be called for. Americanization of Emily was Julie Andrews' second film; it should have led to a steady stream of adult-oriented roles, but the box-office clout of Mary Poppins and The Sound of Music consigned her to "wholesome family entertainment". ~ Hal Erickson, Rovi

Critic Reviews for The Americanization of Emily

Although Julie Andrews is supposed to be playing a war widow, she's actually playing Mary Poppins.

Despite a title which smacks of war-bride sop, [the film] is in some ways the most impressive film since Strangelove.

Another director (not Arthur Hiller) would have been more suitable in translating to the big screen Paddy Chayefky's witty WWII serio-comedy.

I would have appreciated the film more if it was less talky and if it didn't completely ignore the obvious that fighting madman Hitler was necessary.

Classic anti-war comedy. Ahead of its time.

Audience Reviews for The Americanization of Emily

09/02/2010 (ONLINE) I really had no idea what was going on for a while, but I held on and allowed myself to get in tune with the flavor. Although this is not my cup of tea, I must say it was quite a treat. The characters are quite enjoyable and when you begin to understand the style and blends of humorous tones you start laughing a little harder and the appreciation begins to reveal how amazing this film actually is! This is, I would say is a "Romantic Comedy". I loved James Coburn's performance, he really draws light to the film making the experience of viewing this film that much better. Watching this has definitely kindled an interest in me for Silver Screen movies. This new fondness will lead me in considering more movies like this. Black and White.

The Americanization of Emily Quotes