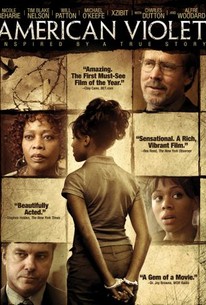 Critics Consensus: Though its politics are as obvious as its outcome, American Violet is an earnest docudrama about the justice system with a powerful performance from Nicole Behairie.

Critics Consensus: Though its politics are as obvious as its outcome, American Violet is an earnest docudrama about the justice system with a powerful performance from Nicole Behairie.

Critic Consensus: Though its politics are as obvious as its outcome, American Violet is an earnest docudrama about the justice system with a powerful performance from Nicole Behairie.

Dee Roberts is a 24-year-old, African-American single mom struggling to make ends meet in a small Texas town. When cops arrest her in a drug sweep, she insists on her innocence. Even though Dee has no prior drug record and no drugs were found on her in the raid or any subsequent searches, she is offered a hellish choice: plead guilty and go home as a convicted felon or remain in prison and fight the charges thus, jeopardizing the custody of her children and risking a long prison sentence. She chooses to fight the district attorney and the unyielding criminal justice system he represents. Joined in an unlikely alliance with an ACLU attorney and former local narcotics officer, Dee risks everything in a battle that forever changes her life and the Texas justice system.

Will Patton
as Sam Conroy

Scott A. Martin
as Jerry Arnold

John Will Clay
as Franklin
View All

While it may be about as subtle as a swinging sledgehammer, it does leave its mark.

A well-played if too-familiar story of oppression and injustice.

A conventional but wholly gripping docudrama.

A torn-from-the-headlines tale of institutional racism and injustice in the Lone Star State of not-so-long-ago, American Violet might not be subtle, but it's certainly powerful.

American Violet dramatizes Kelly's case, and does so in a way that will leave audiences applauding in their seats -- and wondering how much of the film is true.

Director Tim Disney and screenwriter Bill Haney lay out Dee's story with a minimum of fuss. They are smart enough to realize that the material is compelling all on its own.

At the center of the drama is Nicole Beharie, who inhabits her role as a woman unjustly maligned with intelligence, conviction and regal sense of pride.

It's beautifully told, passionate and sensitive to the true story and the victims that lived it.

Less a social-problem film than a drama of personal courage.

Nicole. Beharie. Remember the name, for if her stunning lead turn is any indication, huge things are in the future.

[American Violet] is so compelling and intriguing that it's easy for the audience to forget they're being preached to.

Put on your outrage cap.

It's a story that's been done many times, and it's a bit predictable, but American Violet is a gripping docudrama about the Texas justice system that features powerful and award-worthy performances from the whole cast but I expect nothing but greatness and stardom for Nicole Behairie. (Alfre Woodard is also amazing).

Really, really good movie. Unreal that this stuff really happened, and still happens. I love a good true story, especially if it has Alfre Woodard in it. I cannot believe that this District Attorney was never fired, AND was re-elected to boot. What a world we live in. sheesh

Nichole Beharie as Dee Roberts gives a truly inspiring performance as a mother, living in the projects, who is wrongly accused of drug dealing, and then is caught up in a corrupted criminal justice system that railroads those who have little way of defending themselves against a system created to protect them. The message here, while being a bit heavy handed, needs to be said, and the film does a very good job of delving into the consequences of a political system that simply bulldozes people for government funding, not caring what happens to those they trample. There are some very touching scenes where Dee is jailed for 21 days for a crime she didn't commit; including a scene where she is allowed ten minutes to see her children - through a small grimy piece of glass that is stuck high up in a doorway. The will of this woman to perservere is astonishing, and the film does a nice job of showing you what would have happened if she had taken the offered plea bargain - a felony record that would prohibit her from receiving any kind of government assistance; from food stamps to housing - and, having a criminal record would severly hamper her attempts at finding a job, which of course could possibly lead to child protective services taking her children. Dee has enough problems just getting on with life - trying to raise her children, with her children's deadbeat dad and his abusive girlfriend in the same building, and yet even after her conviction is overturned, her subsequent case (spearheaded by the A.C.L.U.) puts her in the D.A.'s crosshairs - who uses his substantial infuence to not only prevent her from returning to her job of 7 years, but even makes sure that she is terminated from the minimum wage job she finally manages to procure. All for a good arrest record, which not only serves to line the county coffers via federal funds, but keeps the D.A.'s "tough on crime" credo in the spotlight - and, ugliest of all, satisfies his predudice against people of color. Still, Dee persists, and the D.A. is forced to make restitution to those wrongfully accused; but the bigger victory is that the law in which a person could be tried based on information provided by a single source,without corroborating evidence, was overturned. This is a very forthright docu-drama, earnestly filmed, that includes an inspiring lead performance and some equally fine supporting performances by the likes of Alfre Woodard, Will Patten, Tim Blake Nelson, and Charles Dutton.

In "American Violet," Dee Roberts(Nicole Beharie), a single mother of four and a waitress in Melody, Tx, finds herself getting caught up in a police dragnet orchestrated by District Attorney Calvin Beckett(Michael O'Keefe) who has a fondness for helicopters. She is shocked to discover this has nothing to do with the $782 she owes in parking tickets. She and many of her neighbors in a public housing project are accused of selling drugs on the word of a single informant and her bail is set at $70,000 which of course she cannot afford. Her young court appointed lawyer David Higgins(Paul David Story) advises her to take the plea bargain, a 10 year suspended sentence, which many of her fellow defendants accept. But if she does, she will lose any benefits and the public housing where she lives. This is not the first time this has happened as the ACLU gets involved in the person of David Cohen(Tim Blake Nelson) who petitions local lawyer Sam Conway(Will Patton) to help in the case. Based on a true story, "American Violet" should frighten anyone who genuinely fears the power the government can wield against its own citizens. Clearly told, the movie also asks questions about the criminal justice system and how the poor and minorities become trapped in it that somebody will have to answer one day, with a special focus on the war on drugs.(Remember, everyone is innocent until proven guilty.) My favorite scene is where David identifies himself as ACLU, while approaching Sam at a gun range. The movie is not without its share of faults, however, as it could have been better directed. It is also a little too neatly resolved(Damn you, Law and Order!), even if the story is still ongoing. Luckily, the movie is not that heavyhanded, as its sole Potemkin moment comes in an early sequence. And through Will Patton's bravura performance, Sam becomes as much a center of the story as Dee who has the most to lose and proves there is always something worth fighting for.